Snout Corner is in the most north-easterly 1×1 km square of our project area. This monad and the the 1×1 km square just below, adjacent to the A14, are mostly winter wheat and sugar beet farm land and quite barren for birds. But …the adjacent fields just outside our project area are weedy cereal stubbles full of Yellowhammers, finches and wintering thrushes – a good example of the value and diversity that over-winter stubbles offer as bird habitat in intensive farmland. I have seen Roe Deer at Snouts Corner in the past but have records of up 16 Roe Deer seen there recently. There is a public footpath and it is worth a visit!

I received an interesting record of a male Stonechat from the Histon Road allotments from Ben Greig, which he saw in February 2017. This is a good record – stonechats are rare birds in our study area and within the county are uncommon winter visitors and passage migrants and only occasional breeders, mostly to open weedy marginal land in the fens. I have seen only two before in our study area on farmland just south of the A14. The margins around the ponds at Eddington look like potential stonechat sites. 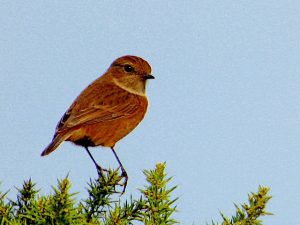 Little Brown Jobs (LBJs) are birds that can be very difficult to identify. Immatures, females of some species and moulting adults cause problems. A classic LBJ is the Dunnock (Hedge Sparrow). Tweet of the Day recently featured the Dunnock with a commentary by Dermot O’Leary (X-Factor compère). He has big respect for this bird because it always seems busy – a grafter! But this bird has its secrets. A classic study by Nick Davies many years ago in the Cambridge Botanic Gardens showed that female dunnocks select an alpha male but also sneak off to mate with a beta male: she is polyandrous. The young are the offspring of both males and all three adults feed the young. It’s a brilliant strategy: if the Alpha male is taken by a predator it still leaves two adults to raise the chicks. 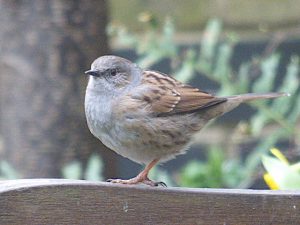 A note in the September/October Bulletin of the Cambridgeshire Bird Club says: Studies of the Cambridge Peregrines have shown that as well as feral pigeons, prey items include Teal, Shoveler, Grey Partridge, Golden Plover, Bar-tailed Godwits, Black-tailed Godwits, Woodcock, Common Tern, Blackbird, Redwing and Starling. These birds may not have been caught over the City. I suspect the City birds travel out to the Ouse Washes (Earith to Sutton Gault). I have seen birds travelling out of Cambridge on several occasions and this seems a regular direction.

Also mentioned in the CBC Bulletin is a fascinating study of night time calls of flyover birds including a record of Ortolan Bunting over our study area. Ortolan Bunting has never been seen in Cambridgeshire and is a rare east coast passage migrant from central Europe. In autumn plumages it is a classic LBJ!.

Bright days in winter often encourage Mistle Thrushes to sing. Their mournful song from the top of a tall tree gives hope of warmer and longer days ahead, I have heard two birds singing recently in Fen Ditton and Midsummer Common. I have seen them feeding on the grassy roundabout and singing from the tree tops at the junction of Chesterton Road and Elizabeth Way.

Duncan’s blog with photographs of Buzzards over the City is spectacular. Buzzards breed just outside our study area.

We now have Buzzards, Peregrines and occasionally Red Kites over the City. Red Kites have bred in our study area. In October 2016 at the junction of Gilbert Road with Histon Road, a Peregrine made a pigeon kill. It was being closely tailed by a Red Kite; the kite was probably hoping the falcon would drop the pigeon which it could then steal. All this happened at roof top height! 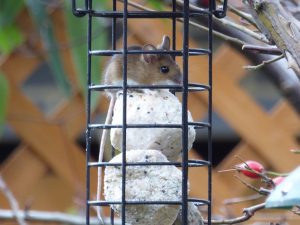 An unexpected LBJ in my bird feeder – a Wood Mouse?