On the last day of March, Suki reported, “There was a sudden burst of song above my head as I returned from Stephen Hawking’s funeral procession – a Blackcap high on a tree at the corner of the market!”

Apart from a couple of crazy days of summer (T30C+) April is departing as it started – cold, wet and windy.  The brief hot spell was enough to kick-start spring and at last there are leaves on the trees. Early flora included Viola reichenbachiana (early dog violet) at Cherry Hinton chalk pit and a wonderful display of Primroses Cowslips and Blackthorn flowers. Now, at the end of the month, May blossom is just beginning to open. Jonathan Shanklin reports that Danish Scurvygrass is coming into flower. It is common on the main road verges around the city, but seems to be less so within the city itself. Generally a coastal plant, road salt has allowed it to move inland. Additional records welcome, please. 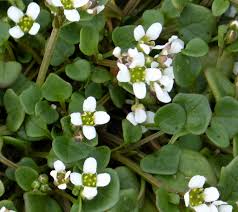 Toads, Frogs and Newts are all reported (sometimes together, even though newts are said to eat frogspawn and tadpoles). By Apr 1st, female toads were moving away from the pond in Arbury, though hopeful males were still calling in Cherry Hinton on 16th.  Frog tadpoles were established in Newnham, Trumpington and Chesterton, apparently surviving the heat, but it has been a difficult spring! Rob Mungovan reported sightings of Roach or Rudd, Perch, Dace and spawning Minnows in the Cherry Hinton Brook. Water Voles seem to be flourishing here, suggesting an absence of Mink.

Several folk have told me of their returning Hedgehogs, now out of hibernation and hungry. My excitement for the month has been the arrival of George… a plump 1kg hedgehog from the hedgehog hospital at Shepreth. Finding they had about 200 needing to be re-homed, I have adopted what I hope will be the first of several, in an attempt to re-colonise Newnham. However, this will depend critically on my neighbours’ willingness to establish corridors between our gardens at hedgehog level and to avoid the use of pesticides and slug pellets.

It is the first year I can remember hearing Fieldfares (not yet departed) and Chiffchaffs (early spring migrants) at the same time. Lots of people sent in records of blackcaps, nesting blackbirds, goldfinches and others. I have the impression Goldfinches have become more common as Greenfinches declined – however, I am glad to hear more of the latter recently again. Greater Spotted Woodpeckers are often heard and Green Woodpeckers have also been seen – Jenny says, “This is the first time I’ve been able to watch one walking along the garden path pulling worms out of the edge of the lawn. He stayed for quite some time until a pair of magpies frightened him off.” 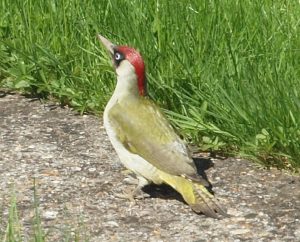 In Chesterton, a Sparrowhawk appeared from nowhere, while a Red-legged Partridge was photographed in Hamilton Rd. 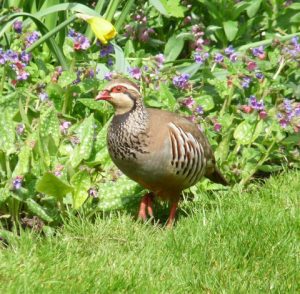 A Cetti’s Warbler was heard on Cherry Hinton Brook – possibly a first for the city? (No, Bob tells me there have been various records in East Cambridge since 2015.) In the yews at Newnham bathing club, we saw and heard Goldcrests – they were also recorded in Trumpington. In the Cherry Hinton chalk pit, Jackdaws are nesting in the cliff face, using the loose rock of the fault line to excavate their holes. 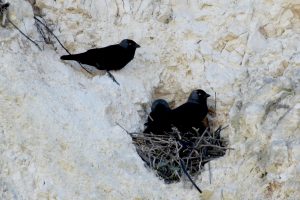 Bees, ladybirds and butterflies have been emerging throughout the month. 7-spot and 24-spot Ladybirds, Brimstone, Holly Blue and Orange-tip Butterflies were all reported. Anthophora plumipes, the Hairy-Footed Flower Bee, seems to have been common this spring. Bombylius major, the Large Bee-fly, has also been mentioned several times. This large fly is a bee mimic and nest parasite which feeds on nectar, especially primroses. The eggs are flicked by the adult female toward the entrance of the underground nests of solitary bees and wasps. After hatching, the larvae find their way into the nests to feed on the grubs. 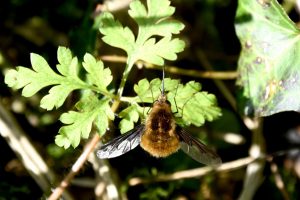 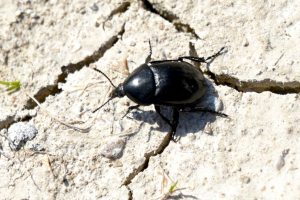 Then, in East Cambridge, Paul Rule found Asiraca clavicornis, a bug 3-4mm in length, generally confined to the London area and south. There have only been 3 previous records from Cambridgeshire. Its long fat antennae with terminal bristles make recognition easy, so keep a look out for it!  You too could be famous. 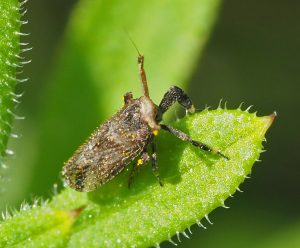 Finally, Manuel reported, “We found Oyster Mushrooms this weekend behind the allotments – very good and edible. We also found Judas (or Jew’s) Ear Mushrooms. They are now called Jelly Ear Mushrooms due to their politically incorrect name, are essentially tasteless but very good in salads.” (Recipe supplied on request!)