Migrants are beginning to slip away. Swifts arrive in early May and depart in August, a shorter visit than most of the summer migrants. A Newnham neighbour has an established swift colony, with both boxes and adapted bricks being used. Behind the bricks are nesting boxes with a glass back, to allow photography and monitoring.  She reports, “We last saw them on August 15th, the adults went in the evening and then the chick fledged sometime in the night … empty box on August 16th. On August 17th I saw a solitary swift swooping round our house briefly, before it flew up and away.”  Swifts have also been using the Swift Tower in Logan’s Meadow, Chesterton since 2011. The main constraint on these birds must be the availability of flies, whose numbers have plummeted over the last 30 years.

Another neighbour recently found a large toad in her garden, also a humming-bird hawk-moth. At the allotments, there has been a superb crop of blackberries, the best for some time. In the local playing fields, cooler nights and lots of rain produced an interesting crop of fungi: a field mushroom, some boletus (Slippery Jack) and some horse mushrooms (larger version of the field mushroom). I did not eat the latter, as there was a suggestion of yellow-tingeing on the broken surface, but enjoyed the others. The boletus is dependent on the adjacent pine trees, which sadly have just been felled, so presumably that will be the end of these at this site.

Relaxing over coffee in the graduate centre, a peregrine falcon came past at eye level – a lovely sight.  One evening, by the river, a kingfisher zipped its way through the swimmers, going upstream.     A lesser stag beetle (with the wonderful Latin name of Dorcus parallelipipedus) turned up on the pavement outside the social club in Newnham. On August 27th, I heard a snatch of chiffchaff song, as well as the contact calls. I wondered if he was calling to gather up comrades for his migration flight.

At Cherry Hinton Hall, workmen were clearing away the remains of the Folk Festival – squares and rings of paler grass indicating the presence of tents over the weekend. Jays called in the woodland and in the lake were yellow patches of marsh marigold.

The spider of the month is this fellow, whom I found in the bath…. 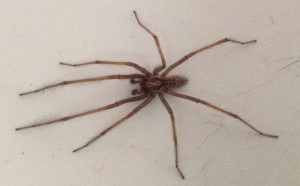 Larger than the house spider (Tegenaria domestica), this giant house spider (recently renamed Eratigena atrica but previously T. duellica) is also common and just as harmless.  The female body size can reach 18.5 mm in length, with males slightly smaller at around 12 to 15 mm. The female leg span is typically around 45 mm while the leg span of the male is highly variable, between 25 and 75 mm. This one has enlarged, club-like pedipalps, so is a mature male, with body 13mm and leg span 66mm. He was doubtless looking for a mate when he fell into my bath. (I will leave a towel over the edge, so he can get out unaided next time.) Once mated, he will remain with the female and eventually become her dinner – the ultimate recycling event!