Keep an eye open for unusual migrant birds that find safety in numbers amongst flocks of tits coming to garden feeders. A very small garden can attract passage Whitethroat, Lesser Whitethroat, Willow Warbler, Reed Warbler even a Yellow-browed Warbler. In a week to ten days, over-wintering Redwings will be heard flying over at night with their high pitched “sseep, sseep” contact call.

Cambridge has a new suburb (or is it a new village?) on the north- west of the city – Eddington; named after the astronomer and mathematician Arthur Stanley Eddington (1882-1944). Between the buildings and the M11 are a group of balancing ponds to mitigate flooding. They already have breeding Little Grebes; Kingfishers have been seen and in the early stages of the project the bare soils and gravels attracted breeding Lapwings and Little Ringed Plovers. In 2015 only 8 breeding pairs of Little Ringed Plovers were found in Cambridgeshire. Kestrels bred on one of the housing blocks under construction, which stopped work until the chicks fledged. Some Swift and House Sparrow nest boxes have been integrated into the build. It an impressive sustainable development and well worth visiting and is part of our project area.

Just a mile away to the east on farmland in our project area, five pairs of Lapwings nested on a field of short barley stubble in spring 2015 – the first time on this site for at least 50 years! Sadly, all nests failed probably due to predation by corvids and despite careful farm operations that marked each nest.

I try hard to like Crows – it’s respect more than like. A paper in the recent British Wildlife (Stoate, 2017) says that controlling nest predators such as Carrion Crows and Magpies increases nest survival rates for vulnerable species such as Song Thrushes, Blackbirds and Spotted Flycatchers. It makes uncomfortable reading! 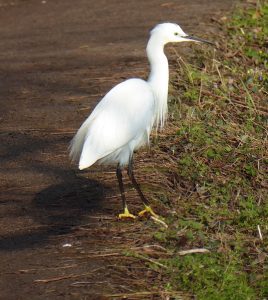 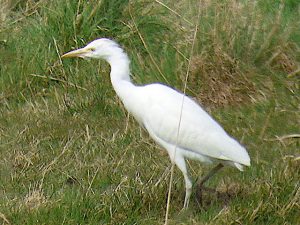 Until 1988 sightings of Little Egrets were so rare that records required a written description to be accepted. (“Medium sized pure white heron with a black bill and legs and bright yellow feet. Period!”) In 1989, 40 turned up along the south coast of England and the remarkable colonisation of the UK began.; they first bred in Dorset in 1996; in 2016, 82 were counted at Burwell Fen near Wicken. Last year I saw two fly over Arbury where I lived as a boy; such an occurrence would have been unthinkable then. Where they breed is enigmatic! They can be seen regularly in Coe Fen and Newnham and along Snakey Path between Romsey Town and Cherry Hinton – almost any shallow water area, ditch or dyke. But beware, amongst farm stock it could be a Cattle Egret! In April 2016 Jon Heath found a Cattle Egret in our project area on Chesterton Fen. It is slightly smaller with a yellow bill and yellowish/green legs and feet.

Three Tawny Owl records so far: two in the Newnham/Coe Fen area and one in Sidgwick Avenue. Please send Tawny Owl records to nathistcam@gmail.com  or to me at the email the address below giving date, location – street name. All records will be confidential and also forwarded to the County Bird Recorder.