Bryophytes in Cambridge are either mosses or liverworts. We are all familiar with mosses – not to be confused with lichens, which are fungi with an algal partner. Cambridge city is full of mosses, which can be found on walls, roofs, tree trunks, bare ground, streamsides, lawns and banks. Liverworts are less familiar, but Common Liverwort Marchantia polymorpha is indeed one of the commonest bryophytes in Cambridge.

In the period 2010-2017 we recorded 127 moss species and 19 liverworts. At the beginning of 2018 the richest monads (1-km squares) were those including the Botanic Garden (85 species) and the City centre (73 species). Other rich squares are Newnham, Coldham’s Common and the Cherry Hinton chalk pits. At the beginning of 2018, we have an average of 29 bryophyte species per monad. We will continue recording the 64 monads systematically over the next 2 years, filling in gaps. When our survey is complete, we expect an average of 40-45 species per monad. 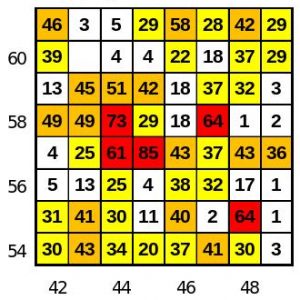 Springy Turf-moss, abundant in many lawns

Chris Preston and Mark Hill have been working steadily on the bryophytes of Cambridgeshire since 2000. We hope to publish a county flora soon. For NatHistCam we are taking a more detailed look at our home town. If you want to join our bryophyte excursions, either in the city or in the country, e-mail NatHistCam@gmail.com .