During the autumnal months of September and October the moth trapping season begins to wind down. The number of moths caught and diversity of species generally decrease with each recording session. Lower night time temperatures, including the first frosts of the season, as well as the increasing likelihood of rain and stormy conditions mean there are fewer opportunities to run the trap. This October there has been an exceptional spell of mild weather. The temperature in Cambridge on the night of 12/13th reached 18 ºC – perfect conditions for some late season moth trapping and over 50 moths graced the trap the next morning; exceptional for this time of year. 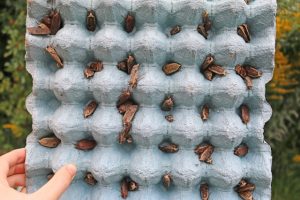 One particular species tends to dominate my garden trap in north Cambridge in autumn – the Large Yellow Underwing. Late August to early September is the peak of the flight season for this big and clumsy moth. At this time, it is not uncommon for over 100 individuals to be filling the trap in a single night’s catch. Accompanying the Large Yellow Underwings are other routine species for early autumn. These include Lesser Broad-bordered Yellow Underwing, Vine’s Rustic, Square-spot Rustic (which comes in an incredible variety of forms) and the oddly named Setaceous Hebrew Character. As we move later into September one of my favourite groups of moth start to appear – the Sallows. These striking moths are generally woodland species, which have evolved a yellow, orange and brown colour mix to their forewings to camouflage against the autumnal senescing leaves. This autumn has been good for this group, with Barred Sallows and Sallows trapped in decent numbers. Dusky-lemon Sallow has so far eluded me this year but I managed to record my first Orange Sallow – a stunner!

Moving into October and the real autumn specialists start to appear. Generally, moths emerging at this time of year are darker with more brown tones compared with those typical of the summer months. Some of the more regular October species coming to my garden include Black Rustic, Blair’s Shoulder Knot and Lunar Underwing. There is always the chance of something more interesting, and though not too rare, I was pleased to catch Mallow, Feathered Thorn and Yellow-line Quaker in recent nights. White-point is a moth that tends to do very well in the Cambridge area and, despite being marked as Nationally Scare B, turns up in most trapping sessions at this time. 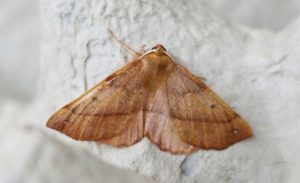 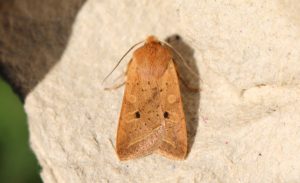 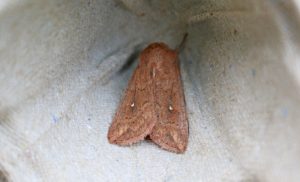 Micro moths are much less numerous in autumn compared with the summer months, with only a handful of species recorded in most trapping sessions. There is however always the potential for a few interesting species turning up, especially if there is a mild night. A new micro moth for me this year was the Box-tree Moth. On finding this invasive species in the trap I was amazed to see how big it was; far larger than most micros and even some macro species! These invaders first appeared in the UK in the London area in 2007, and have subsequently spread northwards. There is now a large population in the Trumpington area – much to the dismay of local gardeners. Other interesting micros from my garden in the last 2 months have included: Epiblema foenella, Agonopterix nervosa and Acleris sparsana. 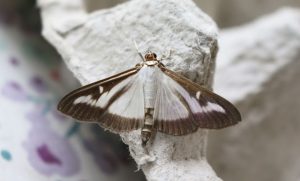 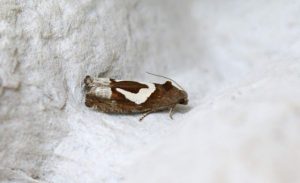