As well as a general report of birds in/over and breeding in the City for our NatHistCam project over the study period I have asked Cambridgeshire Bird Club members to take part in a survey of Blackcaps in the City seen in winter. This blog is to invite anyone who would like to, to take part and contribute. The Blackcap warbler is mainly a breeding summer visitor but is overwintering in increasing numbers.

The objective is to record the number and distribution of
wintering Blackcaps in the project area.

Blackcaps readily come to garden bird feeders and like “Starling” bars and sunflower hearts. They are considered our most efficient Mistletoe spreading bird species. They are greyish warblers the size of a Great Tit – the males have a black crown and the females a brown crown – “browncaps”. They have a distinctive call – a loud, sharp “tak tak tak….” like stones being hit together. Their call is often the first indication they are about. It differs from the softer “tik tik ….” of Robins.

The British Trust for Ornithology in their Garden Birdwatch project (Plummer, K.E. et al 2015) says the availability of garden bird food and milder winters has helped Blackcaps evolve a new migration route and new behaviour. Blackcaps breeding in S. Germany and Austria now migrate NW to Britain instead of SW to Spain.

Roger Isted, a Cambridgeshire Bird Club member found, using coloured rings, 12 different Blackcaps used his garden in winter 2012/13 and 13 different Blackcaps used his garden in winter 2013/2014 – all were different individuals from the winter 2012/2013 (Isted, R. 2010, 2012, 2013). Rebecca Buisson in her Cambridge garden bird survey has already collected some records for this winter (October to December 2016) with single birds recorded in Riverside, Newnham, Cherry Hinton and Mill Rd Cemetery. Other Bird Club members have seen one in Chesterton Hall Crescent, a pair in Benson St and I saw a male in Union Lane on 11th December 2016.

These pictures show male and female Blackcaps in my Chesterton garden in February 2015. This survey would be a useful bench mark against which future surveys could be measured.

The information requested is: Date seen; where seen (street name); male or female. Optional are any other observations such as feeding habits – what are they eating (especially if Mistletoe berries), display/aggression.

Please send winter Blackcap records to me:
bobjarman99@btinternet.com.
I will also send our records to the Cambridgeshire Bird Club Recorder and they will be written up as part of our project.

In the November issue of the birdwatchers’ journal, British Birds, a local birder, Christoph Zockler, regrets the apparent disappearance from Wicken Fen of Woodcock as a breeding bird. According to the Game and Wildlife Conservancy Trust in Britain we have a   resident but declining breeding population estimated at 78,000 male Woodcocks (males can be counted more easily than females because of their “roding” display flights in spring) and a total wintering population that could number 1.5 million individuals.

Most of our winter birds come from Russia and central Europe.   Before bird ringing, in the 19th century birdwatchers believed migrating Goldcrests hitched a ride in the feathers of these wintering Woodcocks! See my November blog about Goldcrests. The Woodcock is a bird of woodland cover and looks like a cross between a snipe, with its long bill, and a partridge. When disturbed it erupts from cover in a panic and for a moment you wonder just what is happening! What is it? 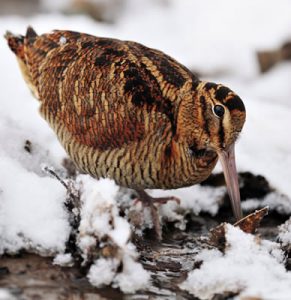 In frosty conditions birds often move to urban areas where it is slightly warmer and the soil softer allowing them to probe for earthworms. I recently disturbed birds from a well-used dog walking path behind Carisbrooke Road, off Histon Road, and a garden in Lensfield Road. In the past I have disturbed birds from a front garden in Huntingdon Road and another from a rear garden in Tavistock Road.

If you have a garden or nearby park with tree or shrub cover or an undisturbed area it is worth looking for this interesting and unusual bird. All garden sightings are worth recording; please send me any records and I will forward them to the County recorder. 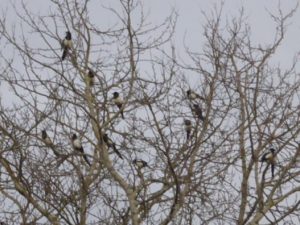 How about 26! The photo shows part of a rowdy group of 26 Magpies at a pre-roost gathering at dusk in Logan’s Meadow Local Nature Reserve, Chesterton. Within minutes they vanished into dense cover and complete silence.

Now is a good time to see and hear Goldcrests, our smallest bird. They like to nest in conifers, especially Scots and Corsican Pines and mature Leylandii. In Coldham’s Lane, Roseford Road and Whytford Place, even isolated Leylandii trees hold their own self-sustaining populations. They rarely visit bird tables and seem to find all they need in their own small habitat. They often join flocks of tits, especially Long-tailed Tits and can be seen almost anywhere in early winter in deciduous trees and shrubs especially with dense ivy.

They are prolific nesters and can lay clutches of 12 eggs although 6-8 is more common; the females often lay a second clutch before the first brood has fledged. They are vulnerable to cold winters and numbers fluctuate, but the recent mild winters have boosted populations and forced birds to use other evergreens, such as ivy, as nesting habitats.

Although it is our smallest bird it is an impressive migrant. In 2015 there was an exceptional influx of birds between October 11th and 20th along the East coast; at Holme Bird Observatory on the north Norfolk coast 829 were ringed in October 2015, compared to the previous October record of 338 in 2005. There was a large influx this year due to the prevailing easterly and north easterly winds that coincided with their exodus from northern Europe. Ringing recoveries show birds have come from Norway, Sweden, Poland, Latvia and Lithuania. Before ringing, ornithologists could not believe that such small birds could migrate and thought they hitched a ride in the feathers of larger migrants such as Woodcock which arrived at the same time. One migrant Goldcrest that landed on the sea wall at Cley in Norfolk was so hungry it attacked a Hawker dragonfly and was dragged along by it in mid-air before giving up and letting go.

Now is a good time to look for them across the City, because our resident population has been boosted by these newly arrived migrants that have filtered inland. The best way to locate them is by call, a very high pitched thin repetitive zeee zeee zeee. Be patient, they can be difficult to locate as they move constantly and nervously through the vegetation, gleaning small insects from the leaves and branches often hovering as they do so. They look “open faced” with a pale area around the eye and a yellow crown – the males have a crimson stripe in the yellow – and two prominent pale wing bars in their greenish plumage. If you see one with a bold white stripe over the eye it’s a Firecrest and that’s another story!

Cormorant numbers are building up slowly! Four were roosting in the Riverside willows in late October. The anglers don’t seem to mind, although this is an ideal spot for them to nest. Numbers of Robins in our gardens have been boosted by a huge influx of birds from abroad. Most of our home bred Robins move south for the winter and are replaced by birds from Europe, particularly from eastern Germany and Poland.

How many Blackbirds frequent your garden over the winter – 3 or 4, 5 or 6 at the most? That’s what a Norfolk birdwatcher thought until he ringed Blackbirds in his urban garden with individual combinations of coloured rings; he counted over 70 individuals!

Black-headed Gull numbers are now building up along Riverside. They are now in winter plumage without their black (actually brown!) heads. Amongst them are the larger Common Gulls without any head markings and a greenish bill. These can often be watched closely, as one cycles across Parkers Piece. Look for any  coloured plastic leg rings with alphanumeric numbering, designed to be read through binoculars or a telephoto camera lens. Details of where and when the birds were ringed are available on the internet.

If you are in the Cambridge Market Square and the pigeons are flying around in a panic, there is probably a Peregrine Falcon hunting. Peregrines now nest in the City; they were once thought of as birds of mountains, cliffs and moorland but Cambridge City now has as many breeding pairs as Shetland! If it’s warm enough, sit outside at Don Pasquali’s on Market Square with a coffee (and one of their excellent pizzas!) and watch the skies!

Large numbers of Waxwings have arrived along the east coast and are beginning to filter inland. These spectacular birds nest in the Scandinavian conifer forests but move south in winter searching for berries especially Cotoneaster, Mountain Ash, Wild Rose hips and Yew. Most years they are rare but there are occasional influxes; hundreds roamed Cambridge in the winter of 2012/2013. Please keep watch for them. They are often remarkably tame and like urban areas. 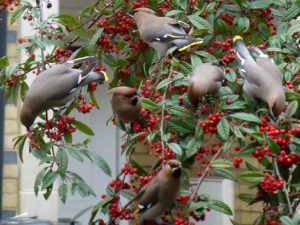 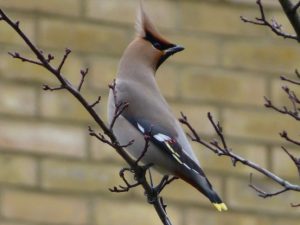 October 2016 has been one of the most spectacular autumns on record for rare birds along the east coast, due to the prolonged period of easterly winds bringing in vagrants from central Asia. Yellow-browed Warblers from central Russia have appeared in exceptional numbers and many have continued a southerly migration inland. Several have been recorded in Cambridgeshire and one or two birds have been seen (and heard) at two locations around Stourbridge Common. They are small very energetic greenish leaf warblers that are best located by their call – a plaintive rising “sooeet”.

(Please send me any records of birds in the City and I will forward them to the County recorder) bobjarman99@btinternet.com