Simon Gillings has more astonishing night time recordings of fly-over bird calls from over his Chesterton garden including a Bittern just after midnight on 16th November. I have heard the birds’ peculiar and distinctive “grunty” bark flight call at Lakenheath RSPB reserve on a summer daytime feeding flight. On the night of the 17th November he recorded at least 33 Dunlins flying over and on the 18th, his busiest thrush night so far: over 800 Redwings, 79 Blackbirds, 5 more Dunlins and a Water Rail. @simon_gillings Astonishing! Simon’s and Jon Heath’s “nocmig” recordings have added a new dimension to birding.

Are these birds moving on a broad front over the county and Simon catches just a part of this, are the birds attracted to the City lights or are these birds following a flyway/highway on a NE/SW trajectory following the river Cam valley?

On 11th November a Yellow-legged Gull and a late House Martin at Hobson’s Park (Rob Pople) and on 15th November a single Bearded Tit around the lake at Trumpington Meadows (Iain Webb): www.cbcwhatsabout.blogspot.com.

Ten to 15+ Bramblings were in the Beechwoods throughout most of November (Mike Foley, John Raven). I saw only 3-4 on 19th near the entrance but found them difficult to see and managed a poor photograph. On the 19th November, a dead and partially eaten (by Magpies) Woodcock was found in Jesus college grounds (Rhona Watson) and Rhona told me of a male Blackcap in the City and one in Huntingdon Rd on 3rd December. These are the first Blackcap records, this winter; I suspect the weather has not been cold enough to force birds into urban gardens and seek food security from garden feeders. 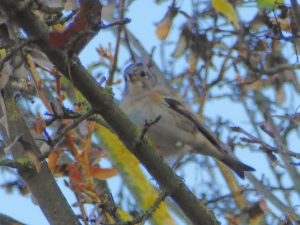 While having a cup of (Mario’s) excellent coffee at Don’s (Don Pasquale’s) on the Market Square, a Peregrine was seen on roof tops, on 23rd November. I estimate the chances of seeing a Peregrine near/around/over the Market Square about 30%;    astonishing considering the only reliable location to see Peregrines, when I started birdwatching, was a quarry behind Aviemore in the Highlands.

St Regis, the apartment complex in Chesterton Road which has the biggest breeding Swift colony in the City, is being demolished. Hopefully returning birds next May will move to the Swift Tower on Logan’s Meadow.

Three hundred Golden Plovers flew over the north edge of our project area on 24th November and 4-500 were over the A14/M11 junction on the same day with about 50 Lapwings.

A Green Sandpiper was feeding on the edge of a farm reservoir on the northern edge of our project area on 25th November. Goldcrests rarely make the 75m journey from a neighbouring mature Lellandii to my small Chesterton garden but they did during the coldest day so far this winter on 26th November. On 30th November, a Mistle Thrush was singing outside Murray Edwards College on Huntingdon Road and on 1st December a Common Buzzard over Benson St/Priory Road was mobbed by corvids at roof-top height.

Black-headed Gulls are assembling from Jesus Lock to Riverside and Parker’s Piece; the maximum count so far is 98 (270 last year) – of these about 10% are 1st winter birds – i.e. reared from eggs this calendar year. Their main food is earthworms on our riverside greens and water meadows; amongst them have been about a dozen Common Gulls.

On 4th December, a Tawny Owl was heard briefly in Magdalene Street behind St Clement’s Church; the Riverside Cormorants roost was 6 birds; just opposite the Darwin Green development, on sugar beet stubble, a flock of about 200 Linnets and on 5th a Barn Owl over Coldham’s Common c19:15 (Simon Gillings). cbcwhatsabout.blogspot.com

Duncan McKay says that six Badger sets are located within a mile radius of the City centre. Polecats have been moving east following the corridors of our major roads; there is a well-established group at Camborne and apparently a pair reared kits in Chesterton 2-3 years ago!