Lots of bird reports this month!  Guy Belcher (City Biodiversity Officer) saw a Stonechat in the Trumpington Country Park on Dec 1st and a female Peregrine on Kings College, sitting in the sun, on Dec 18th.  A mixed flock of Blackbird, Redwing and Song Thrush were feeding on yew berries near the market place and several redwings were seen in a garden near the Grafton Centre, together with both male and female Blackcaps. A female blackcap was also seen in Alpha Road. In Petworth St, a Jay comes regularly to eat mealworms. In Romsey, blackbirds, tits and sparrows are regularly seen in a tiny garden. In Newnham, a neighbour reports a group of about 10 Long-tailed Tits at the feeders every day, with Blue and Great Tits, Chaffinches (no goldfinches yet), a Robin singing very loudly and visibly and a Wren singing unseen. Also up to four Blackbirds feasting on crab apples every day – she said it looked like a Christmas card. By the river, the daily routine of about 300-400 Rooks and Jackdaws continues, a noisy gathering at 7am and 4pm.  Val Neal’s early morning excitement was “A Kingfisher, flying along the river parallel to our boat as we both headed upstream.” Finally, I have a report of a Snow Petrel. (Don’t get excited, Bob!) Jonathan Shanklin mailed this from  the Halley Research Station, Antarctica, where he is meteorologist spending the summer – so slightly outside our study area.

Those of us who love cats are often upset by the wildlife they catch. Sometimes, it is possible to rescue the animal and return it to the wild unharmed, as a neighbour found with a Field Mouse this week. Over the years, my cats have presented me with an unharmed Pipistrelle Bat, a Moorhen, various mice and voles and even a Kingfisher, all of which I returned to the wild.

Hedgehog reports continue to come in, though sadly, many are of those killed on the road. Ann Laskey says, “I saw the skin of a dead hedgehog on the pavement in Hills Road. There was another dead one in our garden. Its remains were being fought over by a magpie and a crow.”

I asked for sightings of creatures which had sought shelter inside our houses. Someone replied, “Invertebrate-wise, I have any number of “dancing” Spiders in my house (the only ones that I can tolerate) – very small bodies and long cotton legs.  And a large Wasp managed to get into my front bedroom, despite the fact that the window hadn’t been open.”

These spiders would be the Daddy-Long-Legs Spider, Pholcus phalangioides, common indoors, but not found outdoors in Northern Europe.

Two reporters have asked to remain anonymous! One says, “ I came down to the kitchen at 2am and found a huge Slug on the floor. It must have been at least 10-12 cm long, yellowish with darker patches. It did explain the slime trails I had noticed occasionally!” This would be either the Yellow Cellar Slug, Limax flavus or the Green Cellar Slug, Limax maculatus and from the size, more likely the latter. As their names suggest, both are likely to be found indoors in damp places, breeding behind kitchen units or in cellars and feeding on pet food or other scraps. As they are nocturnal, they are rarely seen and difficult to eradicate. (But how do they know when it is time to get up and get going?) 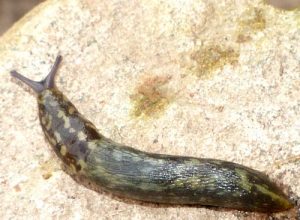 Finally, a Worm! “I found my kitchen sink was not emptying well, so took the plunger to try and clear it. This worked fine, but then I noticed the front end of an Earthworm emerging from the overflow hole. I managed to get it into the compost bin and hope to goodness it was a loner and not part of a breeding colony.”

I do understand these requests for anonymity!

Many thanks to all contributors over the last year