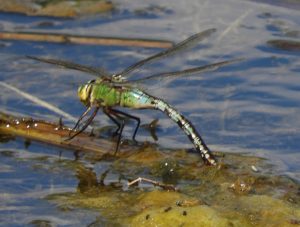 With all the hot weather that we have had this year, the Dragonflies and Damselflies have been spectacular. I started the season watching Large Red Damselflies in late April this year, as they appeared in my garden, which is over 150 yards from Cherry Hinton Brook and lakes. I went on to look at Hobson’s Conduit as it flows across Empty Common and in front of the Botanical Gardens which is the perfect place to watch Damselflies and Dragonflies going about their short adult existence.

Late May and early June is the time when the number of species steadily climbs as more adults emerge from their aquatic larval forms to dance above the waters. Most adult dragons and damsels are relatively short lived and many only live for a few days. The larvae climb up onto a piece of emergent vegetation and then can be seen climbing out of their old skin to emerge in all their adult glory. They leave their old skin still attached to the vegetation and this exuvium can be collected and identified to species.  After emergence they have to disperse and mate, although since many emerge together, mating must often occur quite quickly. In June, there were so many Azure and Blue-tailed Damselflies mating and egg laying on the Conduit, I sometimes had numerous pairs in the frame of my camera. 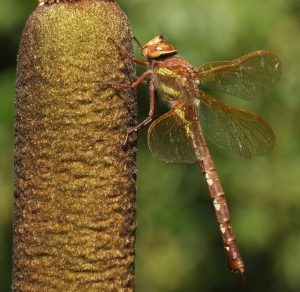 Brown Hawker on a bulrush in the Science Park

The section of Hobson’s Conduit by the Botanical Gardens really is superb and sometimes Emperor, Four-spot Chaser or Brown Hawker Dragonflies will pass within just a few feet. Emperors are easy to identify, as they are the largest British dragonfly and have a green thorax (the bit between the wings). Brown Hawkers don’t come out until July and are identified by their brown bodies and orangey wing colour. 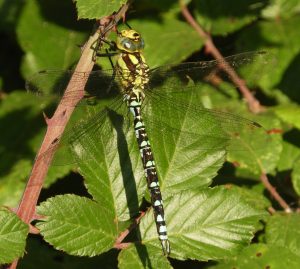 A little later in July Southern Hawkers emerge, with their blue and yellow abdomen and broad yellow stripes on the thorax. These three are the biggest of our native species and are all magnificent as they hunt up and down the water course.

The Chasers and Skimmers are also present and early in the spring and summer the most common species is the Four-spot Chaser. The striking medium-sized beast has a brown body, much shorter than any of the Hawkers. It also has 4 black spots across the fore wings and another four across the hind wings, So I am not sure why it wasn’t called the eight-spot chaser. 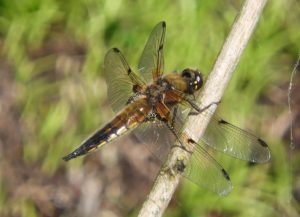 The Broad-bodied Chaser seems a more elegant creature altogether with a  pale blue abdomen with little yellow spots down the side. The thorax is essentially brown with paler markings. 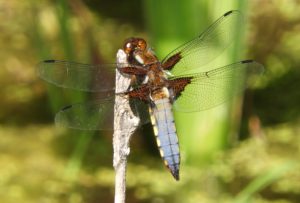 In Grantchester Meadows and also in the ditch around the new bird ponds at Great Kneighton, one can find the Black-tailed Skimmer. The male looks a bit like the Broad-bodied Chaser but with a striking black end to its abdomen and lacking the yellow spots. The female is yellow in colour with two lines of black markings down the abdomen. 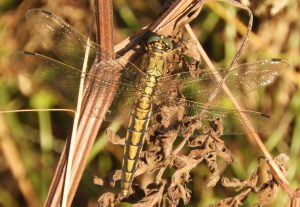 In July and August, Southern Hawkers, Migrant Hawkers, Ruddy and Common Darters all make their appearance. So the summer is constantly interesting with new species to observe.

Common Darter: The insert shows the yellow stripe on the foreleg that does not occur in the very similar Ruddy Darter

One of the most spectacular dragonfly events takes place in Cherry Hinton chalk pits in August. Many Migrant Hawkers and Southern Hawkers can be found hunting in the bushes in the pit on sunny days. Then as the sun begins to go down, a shadow sweeps across the bottom of the pit and the dragonflies move to keep in the sun, so slowly the numbers flying just ahead of the shadow can be very great and hundreds of Dragonflies are amassed together following the setting sun.

There are some other really good sites to see Dragons and Damselflies in Cambridge, the list includes: The ditch across Coe Fen, The complex of ditches in Ditton Meadows, Banks of the River Cam just north of Fen Ditton, Logan’s Meadow, Science Park lakes, Barnwell Pit, Botanical Gardens ponds, Skaters Meadow and Sheep’s Green. Some of the smaller Cambridge nature reserves also have ponds which have good potential, but in the 2018 heat,  these have tended to dry up due to lack of water supply.

I will write more about Damselflies in my next blog.