Gulls are difficult! Immature plumages, different winter and summer plumages, races within species, variation within species, recently separated species and several shades of grey add to the difficulty, or challenge, of identification. The majority of gulls in winter from Riverside to Jesus Lock are our “dead-bog-standard” Black-headed Gulls (without their black heads); numbers range from 140 to 270 depending upon the surface water on Jesus Green and Logan’s Meadow and the availability of worms brought to the surface. There may be a dozen Common Gulls and three or four Herring Gulls amongst them. Look out for Mediterranean Gulls; they have been seen two to three times in our project area. The most recent was a full adult, with Black-headed Gulls in August on wet grassland on the new Darwin Green development; it was probably a dispersed adult from a single breeding pair near Earith. Lesser Black Backed Gulls are mainly flyovers along the river BUT……..in summer birds have been seen in the city centre suggesting they might be nesting on the rooftops!

Travel out of our project area to the Amey Cespa recycling plant at Landbeach/Cottenham Long Drove and the tip at Milton and the number of gulls and species and complexity of plumage variation increases. The following photographs taken over winter 2017/18 on Riverside/Jesus Green illustrate some of the plumage variations:

Seventy-three Grey Partridges at Nine Wells is a spectacular count and 15 in two family coveys on farmland in the north of our project area; four Little Egrets near Long Road in December. Little Grebes are not common on the river, they used to breed on Riverside but increased use of the river probably disturbed them; one was seen in January and two pairs appear to be resident further along the river at Fen Ditton; three in the balancing ponds at Eddington on 4th February. A Great-crested Grebe on the river opposite Trinity College, dodging punts, in early January was unusual.

An oddly confiding Buzzard in College grounds on the 4th February appeared to be nest site prospecting. City Peregrines were seen mating on 1st February and then returning to a nest site – that’s got to be good!

Blackcaps continue to show; in addition to sightings in Olwen’s blog, birds have also been seen in Longworth Avenue, Tenison Road, Benson Street, Stanley Road and East Chesterton. Six Siskins have been daily visitors to a garden feeder in Longworth Avenue and a small group are regular in the Priory Road/Benson Street area off Huntingdon Road. Small groups of Lesser Redpolls have been seen feeding in the alders adjacent to the guided bus track near Cambridge Regional College and Cambridge North Station; they were in the alders in Green End Road but these mature trees have been felled; a flock of 35 Greenfinches in Storey’s Way on 4th February were unusual for a species that is on the verge of being Red Listed. The Bullfinch in Oxford Road in Olwen’s January blog is unusual; it had probably come into the warmer City, like the Greenfinch flock, for food.  Current research suggests Bullfinches pair for life which enables them to breed earlier than unpaired birds.

A Firecrest in Holly bushes in late January at a site in the north of our project area might just indicate a breeding territory (see blog, The Birding Account, January 2017), a Jack Snipe in the east of our area and townie Woodcocks are unusual waders.

So far only five Mistle Thrush territories have been counted in our project area; there must be more but their absence in Cherry Hinton could account for the lack of Mistletoe there. 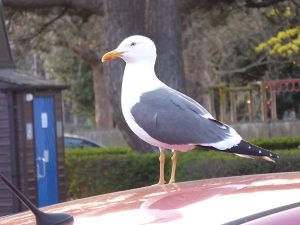 The same adult Lesser-black backed Gull, showing how the light can affect the appearance of the grey back and wing colour.