So many sightings this month!!  Many thanks to all contributors. We have had all sorts of weather, but on the whole, it has been warmer than usual and a lot of records relate to the early flowering of plants and the activities around bird feeders.

Invertebrates: On 22nd December, Ben Greig saw this caterpillar on Cranesbill, thought to be a  caterpillar  of the Angle Shades Moth Phlogophora meticulosa, whose second brood overwinters as a larva. 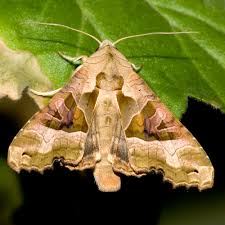 Outdoors, there have been a few sightings of a Buff-tailed Bumble Bee queen (on a sunny December day on Prunus autumnalis, Jan 12th on Daphne flowers and Jan 22nd on some cyclamen in a window box). Throughout January, a Peacock butterfly has been resting immobile on the carpet in my spare bedroom. One observer found little caches of dead Ladybirds in the corners of the windowsills, outside – perhaps caught out by the unpredictable weather.

Mammals: a few Muntjacs are around: off Millington Rd one evening, in the Hills Rd area in a back garden, two grazing happily in the Botanic Gardens and one in a garden off Barton Road in daylight. On the road out to Wimpole were two dead Badgers on the roadside and also a dead Fox. In Hills Rd area, a fox was seen in a front garden. Hares abound on the fields along the Grantchester Rd: five (possibly a sixth dead on the road). In central Cambridge, there was some Hedgehog movement – signs of  nibbles from the food left for them, but not seen yet.

Fish: On Jan 22nd, I asked a young man fishing in Paradise what he just had caught and he very proudly showed me pictures of two Pike – a huge 17lb and a smaller 12lb he had just hauled in and then released. The larger one was longer than his arm – the biggest he had ever taken. It did make me wonder whether swimming in this river is wise!

Birds: Signs of spring include the Greater Spotted Woodpecker, seen on feeders and in the last week, drumming to establish territory and attract a mate. Tawny Owls are calling, both in Newnham and at Cherry Hinton hall. My Song Thrush began to sing around Jan 10th. Green Woodpeckers are also about and in Newnham are heard calling insistently. A couple of Jays have been seen gathering coconut fibre from a hanging basket! A Kestrel appeared to be inspecting a nest site. Most of the winter thrushes seem to have disappeared, but seven Redwing were seen at Cherry Hinton early in the month. Wood Pigeons, Collared Doves and Stock Doves are all calling now.

The noisy Herons came back to the Newnham heronry on Jan 25th, circling and visiting the nest sites. Today, 30th, I counted 10, wheeling the sky as if to inspect their housing estate and choose the best spot. The Rooks appeared to have disappeared from their winter roost in Paradise until today, when they reappeared along with a large flock of jackdaws and have stayed the night instead of going off to Madingley as usual. Most odd! There were some very disapproving noises from the herons whose nests are in the same trees.

Birds are beginning to pair up over the last two weeks. Liza Steel has a beautiful pair of Song Thrushes, and also a Blackbird pair, a very distinctive female with a rufus, spotted breast like a juvenile and light patches above her eyes. The usual suspects have been active at feeders – Long Tailed, Blue, Coal and Great Tits, Blackcaps, Robins, Blackbirds (nine, mainly female, in a small, central Cambridge garden, along with fourteen Goldfinches).  Dunnock and Wren are also seen regularly, but a couple of people mentioned Starlings reappearing after an absence of some years. However, House Sparrows, Great Tits, Goldfinch and Chaffinch are rarer than before. Magpie, Collared Doves, Jackdaws, a Mistle Thrush singing in Chesterton and a Peregrine on tower of University Library all had a mention. Less usually, a Red Kite was seen over the new Bio energy building, a female Bullfinch in Oxford Rd on Jan 18th and a Little Egret at Fen Ditton meadows Jan 21st.

The traditional New Year’s Day hunt for plants in flower took place from Stourbridge Common, through Chesterton and up Moss Bank to Cambridge North Station.  A list of 88 species in flower were noted! This was one of the longest lists of over 600 from round the country. It included common things which flower all year round, such as Daisy and Dandelion; some small plants where, at the best of times, it is hard to see the flowers and a lot of ruderal species which seem to be enjoying the disturbed ground of the old railway siding near the station. Expert botanists recorded four different members of the Senecio genus: Common and Oxford Ragworts, Common and Sticky Groundsel. But no snowdrops or crocuses! Possibly the most unusual species was St. Martin’s Buttercup Ranunculus marginatus, a casual from the Scilly Islands which sometimes turns up in wildflower mixes – it’s also found on Magog Down. The full list is at https://nyph.bsbi.org/results.php . The most surprising find was Lavender, growing wild – and still in flower – near the David Lloyd Tennis Centre off Coldham’s Lane. 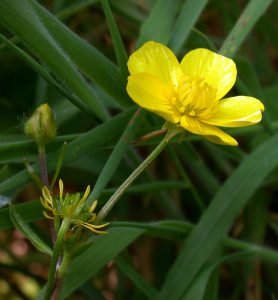 Woodland plants which can be found in flower at this time of year include Butcher’s Broom Ruscus  aculeatus which is in the grounds of Cherry Hinton Hall (and elsewhere). It has tiny flowers apparently growing out of the leaves. 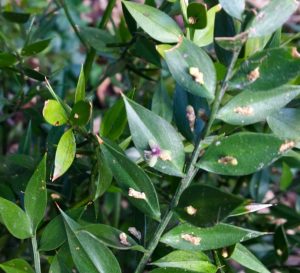 Stinking Hellebore Helleborus foetidus, a relation of the garden Christmas Rose, and Spurge Laurel, Daphne laureola, are flowering in some scrub across Cherry Hinton Brook and Marsh Marigold, Caltha palustris was also found in bloom. 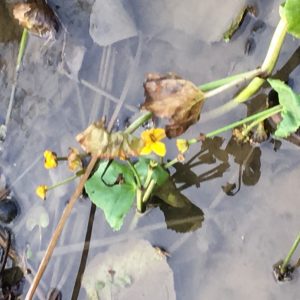 Our Mistletoe Survey continues to be intriguing. Why so much in some parts of the city, but none in Fulbourn, Grantchester, Trumpington or Fen Ditton? Do you have Apple Trees in your garden? Do they have any mistletoe? We would love to hear from you either way.

Finally, a friend emailed me with the comment, “Worst news is Paradise Lost”.  Contractors had dredged the ditch with heavy machinery, depositing mud and silt over a large area of woodland and snowdrops in this lovely nature reserve. Fortunately, they avoided the majority of the Butterbur which has been there for generations. We will have to wait restoration, but I am sure Paradise will be Regained and the devastation abated within a few months.