This month’s highlight has been the flock of 24 Waxwings which have been devouring the berries in the front gardens of Cherry Hinton. These beautiful birds are winter visitors from Scandinavia, coming to find a new source of winter food when weather conditions are bad there. They are generally in small flocks, moving from one tree to another. This one was enjoying the rowan berries, in the company of the occasional mistle thrush. 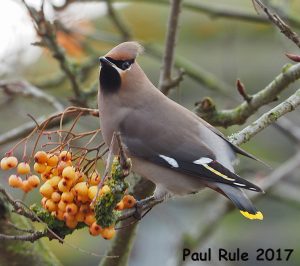 I am always intrigued by Rooks and Jackdaws. The tall trees near the river in Newnham may contain as many as 300-400, in a mixed flock. I know that there is a very large roost at Madingley, described in detail in 1931 and probably there for very much longer. Outside the breeding season, several thousand birds (of both species) congregate there each night from far and wide – even as far as Manea in Fenland. In the mornings, they disperse and sometimes only a few come my way. Other mornings, between dawn and sunrise, there is a massive noisy flock, wheeling and turning in the sky. They settle briefly and then go about the day’s business. Later, at tea time, they reassemble before returning to Madingley – a trip of about 4 miles and taking just a few minutes. (I imagine they are much quicker than the car-bound commuters on the same journey!)

However, Newnham does not appear to be a rookery – there are no nests there – simply a stop-off place. So where do they spend the day and where are all the rookeries? If you know of any rooks’ nests within the city, please get in touch with us. Also, if you also see large flocks, that would be good to know too. 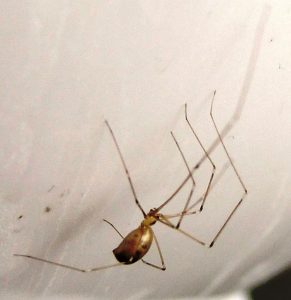 My spider of the month is the Daddy-Long-Legs Spider, Pholcus phalangioides. This is not to be confused with the other “Daddy-Long-Legs”: the Harvestmen (also arachnids but not spiders) and Crane Flies (long-legged insects with wings). Pholcus is a widespread species, but intolerant of cold. It survives as an indoor inhabitant of houses throughout Europe. You may find them in cupboards and cellars, high up and upside down, in a wispy web. When disturbed, they vibrate rapidly on their very long legs – probably a defence mechanism. Like most spiders, they have eight eyes, but in a very unusual distribution. There are two groups of three and then two tiny ones in the centre. They catch and eat other spiders, small flies such as mosquitoes and even woodlice – so entirely harmless and welcome house guests. Any in your cupboards?