As I begin to write this month’s account of Cambridge wildlife, we had thunder and the first rain since the end of April, nearly 3 complete months. However, about 20 minutes of rain will do little for the yellow grass and nothing at all for my allotment. Chris reports Strawberry Clover (Trifolium fragiferum) coming into flower at the beginning of Wimbledon on Jesus Green. It has been present there for at least 26 years and is always more obvious in a hot summer, as it is very drought resistant. Then, in a ditch at Great Kneighton, Trumpington, Cotton Grass (Eriophorum angustifolium), which is normally found in acid bog habitat, was fruiting well in a ditch – clearly planted during the development of the site. 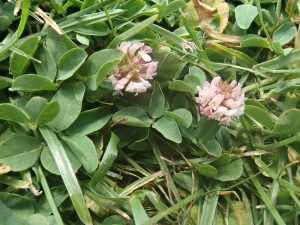 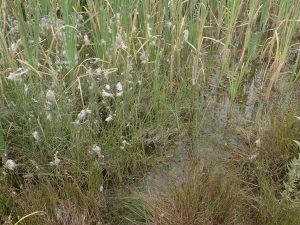 I have had several reports of beasties which seem to be moving north, as the climate warms. The Horse-chestnut Leaf Miner (Cameraria ohridella) is the 4mm invasive Moth that is doing all the leaf damage to our conker trees. It was first reported in the UK in 2002 in Wimbledon, and has since spread north, south and west to most of England and parts of Wales. In continental Europe, it was estimated to have spread at 60 km/yr.  This pest has only a minimal effect on host tree vigour but causes very unsightly damage. A Jersey Tiger Moth was reported from Trumpington and again, these appear to be extending northwards. One was spotted by my 4 year old granddaughter, Rosa, in Tonbridge Kent. 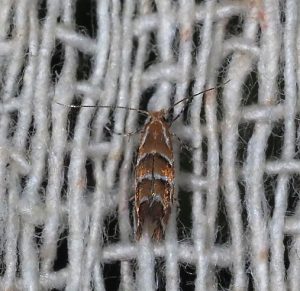 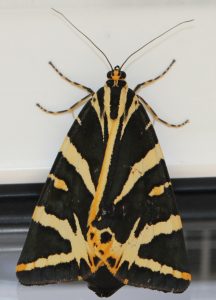 Ben’s Tree Lichen Beauty Moth has previously been known as a summer migrant, but may now be breeding in UK. 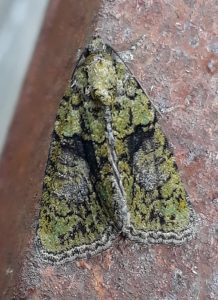 Then Garret reports a Plane Tree Bug (Arocatus longiceps) from Jesus Green. Another recent immigrant to UK, it was first noted in 2007 and is now abundant on plane trees in parts of London 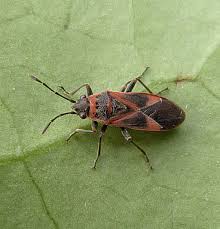 Guy reports successful Kestrel breeding: 4 youngsters fledged from the box on Stourbridge Common and at least 3 on Sheep’s Green. Swifts are also doing well – In Newnham the maximum number of adults seen was 12, with 4 nesting pairs. CCTV shows an older larger chick spreading its wings and doing press-ups in readiness for the long flight ahead. The Newnham heronry is alive with yelps and clacking beaks as the adults fly in with food. Jill’s second brood of Robins is now being fed, thankfully with masses of cabbage white caterpillars available for them. A glimpse of a Kingfisher at Grantchester Meadows and the sight of a Common Tern fishing there were bonuses for swimmers and punters. Swans with seven cygnets were doing well, though may be threatened by the Pike in the Cam: one 40 cm pike was seen along Garret Hostel Lane.  Other birds included Nuthatch and Grey Wagtail at Byron’s Pool, Tawny Owls, Buzzards, Long Tailed Tits,  oversexed Wood Pigeons, a Green Woodpecker (heard but not seen), 2 Hobbies and a Red Kite. At the Sewage Works (aka Anglian Water Recycling Works!) I noted Black Headed Gulls, a pair of Stock Doves, a Pied Wagtail and about 200 roosting Starlings. This was a fascinating visit, where I learned how they process about 1300 litres/sec (a decent-sized river), produce enough Methane to generate 40% of their electricity, sell the sewage sludge for fertiliser and then return the water to the Cam. 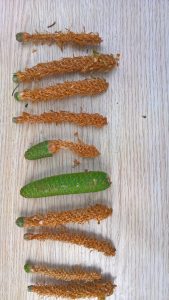 Bill reports a Spruce tree full of new cones being attacked, probably by squirrels. Lots of animals must have struggled in this dry weather. Two Hedgehog introductions took place in Newnham this year. George appears to have wandered off, but Spike is still around and two infants were recently found on the pavement nearby. Even though fully spiked, at only 2.5 ozs, they were taken to the Shepreth Hedgehog Hospital for care and feeding. 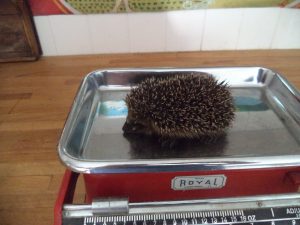 Elephant Hawk Moths have been abundant this year and one Red Underwing Moth was seen. It has been an excellent year for both Large and Small White Butterflies. More unusually, Guy noted a White Letter Hairstreak and a Small Copper at Byron’s Pool. Small Blue, Holly Blue, Meadow Brown, Comma and Peacock butterflies were seen across the city. Then various reports of damsel and dragonflies. Duncan saw Brown Hawker, Southern Hawker, Ruddy Darter, recently emerged Common Darter, Emperor, Four Spot Chaser, Scarce Chaser and Black Tailed Skimmer all present along the Cam. Sue heard buzzing in her kitchen and found Buff-Tailed Bumble Bees using an old vent in the wall. Wasp mimic Hornet Hoverflies were noted by Martin. I had one comment about lots of Hornets, but I have seen none this year and very few wasps.

But how about these two pictures?! 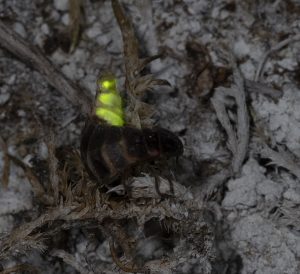 Paul took this one of a female Glow Worm (Lampyris noctiluca) at Cherry Hinton chalk pit. These static flightless female beetles sit in the grass and supply landing lights for the males. (“Very hard to photograph if you want to shoot the glowing tail and the rest of the insect – a 5 second exposure with fill-in flash for these shots.”) The Wildlife Trust organises Glow Worm walks around the chalk pits.

And then Ben reports a female Gasteruption jaculator Wasp in Oxford Rd (with a wonderful white-tipped ovipositor and a great name). 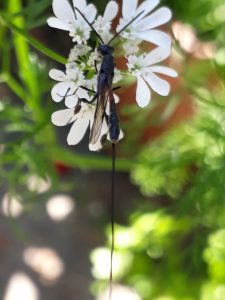 At the allotment, I found a dead Mole lying next to a Hare’s foot! I can only think that the hare was enough for the fox and this was the remains of dinner. Jill found a Grass Snake skin on the back porch, a reminder that reptiles (though cryptic) are still around. Blackberries are starting to ripen. After a brief thundery interlude, the drought looks ready to continue, but in Pam’s small pond, the Frogs are enjoying the cool water. Will it rain in August? 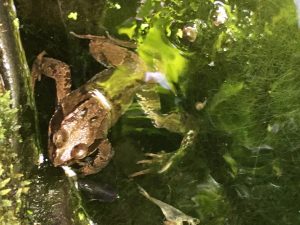