The Mistletoe survey at the beginning of 2017 resulted in 122 records of Mistletoe in the NatHistCam area. The most common host trees are Poplars, Lime, Hawthorn and Apple. Mistletoes does not seem to like oaks; or perhaps oaks do not like mistletoe. These are visible locations and probably underestimates the actual distribution of mistletoe across the City; there are probably many more, out of sight, on garden hawthorns and apple trees. This is the next phase of the survey – to uncover the distribution in gardens although very little mistletoe has been found in the 21 gardens surveyed so far.

Please let us know if you have apple trees in your garden (and what varieties) and whether any of them have mistletoe growing on them.

The tree-top distribution of mistletoe is probably by thrushes, particularly Mistle Thrushes. In Chesterton I have seen a Mistle Thrush “hunkered-down” in a clump chasing off any visiting thrushes. The distribution in gardens maybe due to wintering Blackcaps. I have seen two male Blackcaps chasing off thrushes visiting a clump on a garden hawthorn then squabbling with each other over grazing rights! The birds wipe the sticky berries from their bills onto tree branches. Mistletoe seeds do not need any pre-germination treatment by passing through the bird’s digestive tract.

Mistletoe is a hemi-parasite – its roots infiltrate the host’s conductive tissue for water and nutrients absorbed through the host’s roots but the mistletoe’s green foliage actively photosynthesises. It is dioecious (“two-houses”) with separate female berry-bearing clumps and male pollinating clumps that produce no berries. Clarke Brunt has infected apple trees in the orchard at Milton Country park (on the northern edge of our project area) and says that aerial shoots of mistletoe appear after 3-4 months but its takes 2-3 years before significant growth is visible and the male plants produce pollen before the females bear berries.

Why kiss under the mistletoe? The two berries at the base of the leaf fork are supposed to represent male and female fertility. After each kiss, a berry is removed from the stalks; when the last berry is removed, the match for life of the kissing couple has been made. Mistletoe is the marriage matchmaker! 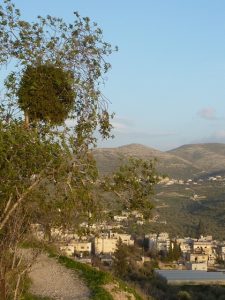 Mistletoe is associated with many superstitions especially in Nordic legends. In Christian legend, mistletoe was originally the crown of thorns forced onto the head of Jesus as he carried the cross through Jerusalem to Calvary. The Lord was so angry with the thorny rose bush that he transformed it into mistletoe – a flabby, parasitic, thorn-less shrub that grows at the tops of trees. The original crown of thorns (a Rubus bush) is supposed to grow only at St Catherine’s monastery in the Sinai but contemporary history says that it is a cutting from the original bush that grows in the Greek Orthodox archbishop’s garden in Jerusalem. 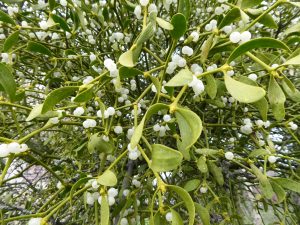 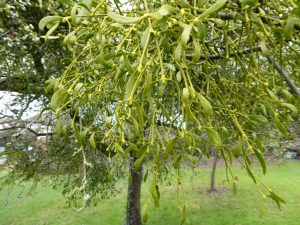 Mistletoe is grown commercially in the fruit orchards of Kent and Worcestershire. Perhaps profits have reduced as  mistletoe establishes itself as wild plants but female berry-bearing clumps growing within easy reach in Chesterton seems to remain untouched.