One of the young Peregrines from the city centre nest site fell to the pavement on 5th June. It was taken to the Raptor Foundation near St Ives for rest and recovery and released to its nest site on 12th June. A second bird fledged successfully but a third chick died in the nest. The Peregrines at the second site had one large chick in mid-June. The bird from this site that was shot last year and also taken to the Foundation recovered and was successfully released earlier this year.

A pair of Sparrowhawks displaying over Canterbury Street on 31st May suggests a late nesting attempt – the first might have been lost in the April rains. A male Sparrowhawk over the old Ridgeon’s site in Cromwell Road was probably on a hunting mission from the active nest in Romsey Town.

A Cuckoo in Rustat Road on the 8th May was an unusual city record – it may have been “casing” Hedge Sparrows to parasitise.

A Barn Owl hunting over Ditton meadows on 1st June during the day was probably feeding growing chicks in a nearby nest.

Change of ownership of a terraced house has meant the ivy growing on the front of the house has been removed and one of the best House Sparrow colonies in the city has been lost. It’s a difficult one: ivy growing on house walls – I’m sympathetic to the new owners and would probably do the same myself.

A cycle ride from Chesterton to Addenbrooke’s on 12th June across Coldham’s Common produced the following singing warblers: 10 Blackcaps, 3-4 Chiffchaffs, 2 Common Whitethroats, 1 Lesser Whitethroat (by Barnwell Road bridge) and 1 Garden Warbler (south eastern corner of Coldham’s Common, in the tall hedges). This time of year Chiffchaffs make a strange, soft “grrk, grrk” call between “chiff-chaffing” which is often not mentioned in the text books. No Cetti’s Warbler in Barnwell this year – might not have survived the Beast from the East.

Blackcaps are abundant this year with birds singing in most dense groups of shrubs and trees – St Lawrence’s School, Arbury Road and on the other side of the road at St Catherine’s Road/Arbury Road junction are good examples. A Willow Warbler singing in the birches opposite Cambridge North station suggests breeding. This warbler is becoming scarce in the south of England; the UK population seems to be moving north and west.

Common Whitethroats have eventually turned up but about half the usual number. Sedge Warblers are in very short supply. Goldfinches feeding on sunflower seeds appear to discard the embryo end of the seed and just eat the endosperm.

Three to four pairs of Swifts appear to be using the Swift Tower in Logan’s Meadow. The UK population of Swifts is about 87,000 – down 50% in the last 20 years and has probably declined due lack of nest sites as we seal and modernise our roofs and loft spaces. Swift awareness weeks encourages us to install nest sites in our houses, see: www.actionforswifts.blogspot.co.uk/.

A second count of apparently active nests of House Martins at Addenbrooke’s in mid-June produced 74 (73 in mid-May!).

Hobson’s Park between Addenbrooke’s Hospital and Great Kneighton is well worth a visit (bicycle is best!). There are at least eight singing male Corn Buntings making it the best local site for this bird I know. Corn Buntings are Red Listed resident farmland birds and have suffered a severe population decline of 90% of the breeding population between 1970 and 2010 (Balmer et al 2013). They are late nesters and nest on the ground. If they nest in winter barley the eggs are destroyed at harvest in late July and if they nest in winter wheat the young are killed at harvest in late August. They have also suffered from the lack of over-winter stubbles for winter feeding. In 2016 John Meed had 6-7 Corn Buntings on the adjacent grid square covering Nine Wells. 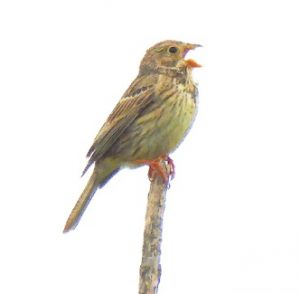 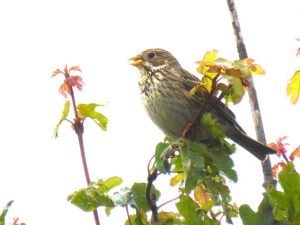 Hobson’s Park also has plenty of Skylarks and a few Meadow Pipits breeding – the latter another Red Listed resident bird of our open countryside. The lake there has 2-3 pairs of nesting Common Terns amongst the breeding Black-headed Gull colony and, at least, 2 pairs of breeding Lapwings and Little Grebes. Sadly, there are no Sedge Warblers – the habitat looks ideal – but at least two singing Reed Warblers.

The single Common Tern seen in April on Riverside was probably the same single bird at Milton Country Park; that too has left. Sadly, no Common Terns are to be seen in our project area along the river Cam this year.

The RSPB does an annual nocturnal “listen” for Crakes and Rails at their wetland reserves; this year they located a calling Little Crake at their Ouse Fen reserve between Over and Holywell on 23rd May. The last County records were both in the City in late March at Barnwell in 1826 and Chesterton in 1864 (Bircham 1989); both birds were collected, i.e. shot and stuffed!

Common Blue butterflies were out at a farm site in the north of our project area in May and June enjoying the hottest May on record; I’m not much of a botanist but there are vigorous plants of Viper’s Bugloss (love the name) along the cycle-ways at Cambridge North Station and Hobson’s Park. Ivy Broomrapes are appearing in the ivy central reservation in Longworth Avenue, Chesterton.