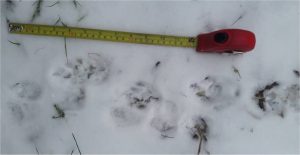 In the first cold snap in February I found to my amazement some fox prints in the snow in my Cambridge garden. I followed the prints round the garden and they came through a gap in the fence that had been created by the recent high winds. It then trotted down past my garden shed to inspect the end of my garage. Sadly for the fox, I had not left very much out in the garden. In any case all the local cats would have devoured anything vaguely meaty long ago. So the poor old hungry fox left disappointed. The next morning, when I found them, the prints were really fresh and clearly identifiable. You can distinguish fox prints by their very pointed diamond shape and are much narrower than dog prints. I went out into the road, where the prints had mostly been obliterated by all the Birdwood Road foot traffic, but I did pick up the trail going in and out of several other gardens. So the fox was obviously doing the neighbourhood.

But this raises a number of questions: Where did she (or he) come from? How often does she/he repeat this scavenging hunt at other times during the year? Are there other foxes around and what is the size of the Cambridge fox population? 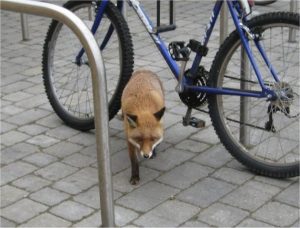 In an article in  New Scientist article (4 January 2017), they reported on a Brighton University researcher who had come up with the figure of 150,000 urban foxes in UK cities. Since 54% of our 60,000,000 population of humans live in cities and at the last census Cambridge’s population was 123,900 people, on a pro rata basis that means we should have 573 foxes living in Cambridge. So I wonder where they all are? Even if we only have half that number, we still have a lot of foxes to track down. The curious thing about these results is that whilst the population estimate has risen from an figure of only 33,000 in 1990 (a 450% increase), the sightings of foxes has fallen by 43% in 20 years. So either the foxes are much better at avoiding being seen, or we are spending so much time looking at Springwatch on the TV, that we are missing them. 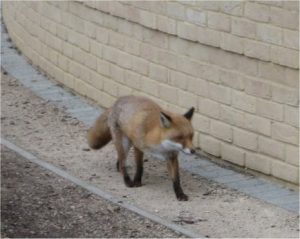 It is amazing that this research has shown that in Bournemouth there are 23 foxes per sq km and in London the population stands at 18 foxes per square km. At these densities our 64 grid squares could hold 1,152 foxes. That does sound like rather a lot. We now need to find out about the Cambridge fox population and see just how big it is, where they are denning and much more about their behaviour. 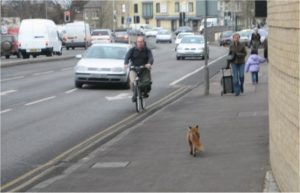 So if you have seen a fox, have footprints in your garden or even have a fox den under your garden shed, we would dearly like to know. Rest assured we will not disturb them and will not reveal these locations to the general public.