What could be nicer than the sight of a Kingfisher in Paradise on the first of March! Thanks, Mary, for this one. Rarer, for me, was the Treecreeper at the end of the lane to the bathing place.  A flock of 20 Lapwings, a Kestrel over a bird feeder, 5-6 Snipe in the Skaters Meadows, a female Blackcap in a garden – lots of bird sightings in the cold early part of the month. In Grantchester Meadows, fishermen told me they had just seen a Barn Owl and later I came upon a pair of Little Grebes together and calling – a lovely downward trill which I had not heard before (https://www.rspb.org.uk/birds-and-wildlife/wildlife-guides/bird-a-z/little-grebe).  The pennywort clearance work has cut back much of the overhanging vegetation, but been careful to leave periodic refuges for breeding birds.

The Newnham Heronry is noisy and there are at least 3 nests, possibly more. On the peninsula opposite Paradise, where the feral domestic white Geese hang out, I found 3 nests, two of them with eggs, but no sitting birds. Although they are sitting now, I doubt whether any will hatch after such freezing exposure. This flock once numbered more than 20, but has fallen to about 12 now – considerably inbred, a few have a congenital wing deformity which prevents flight. Two male Teals were seen in Newnham and further afield, I saw 12 Teals consorting with Mallards on a frozen pond near Long Rd, a single Shoveller on the Cam and a Grey Wagtail under the M11 bridge, calling very loudly against the thunderous roar of overhead traffic. A Sparrowhawk was seen at Cherry Hinton Pit. Fieldfare and Redwing became tamer in the cold weather – this fieldfare was eating an apple in the snow – thanks Mike. 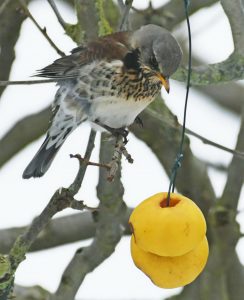 Ben Greig describes a Stock Dove in his garden on 10th and a Buzzard still present (hunting) in Histon Rd allotments. First sighted 1st March, it was often seen circling over the farmland that is now Darwin Green, but not on the allotments themselves until now. Also small flock of Reed Buntings and a few Linnets on the allotments 1st March (that very cold week). A Woodcock was flushed when we visited the Laundry Farm ancient orchard, alongside Barton Rd on March 14th.  I am told that Red Kites have bred in the north of the Project Area in 2015 and raised one chick.  And one was seen over Regent St on 4th March, so they are around!

What else? Spring is generally delayed by the freezing weather! I returned from 2 weeks in South African autumn expecting to find the blossom was over, but little had changed. The occasional 7-spot Ladybird, two Frogs mating in Pam Gatrell’s pond on 9th Mar. Over 50 Toads were recorded migrating to the pond for spawning from Stanley Road & Oyster Row. Volunteers here round them up from roads and paths, taking them to the pond safely.  Duncan McKay found some Green Hellebore growing in the West Pit at Cherry Hinton – a first sign of spring. Lots more to come in April, no doubt. 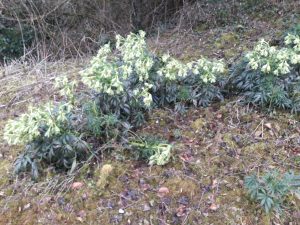