The early UK spring foliage and flowers cannot be beaten – returning from a trip to the tropics, I found Cambridge spring in full flood. Elderflower is now adding to the heady scent of the May blossom and cow parsley. Lots of migrant warblers are here now, but it was a great delight to hear a Cuckoo from my back doorstep on May 2nd.

Then on May 10th, the first screams of airborne Swifts, returning for their summer holidays. The UK must be the only place they ever touch down, as they nest and rear young here, but otherwise live their lives on the wing. I expect Bob will tell us where in Cambridge they are nesting.

Mayflies have hatched in Paradise, Newnham’s local nature reserve. The new pond there provides quiet water and lots of emergent vegetation, while excluding large predatory fish. For a few days each spring, evening swarms can be seen as the males search for a female before ending their brief adult lives.

Above the gate and near the chapel in Trinity Great Court, House Martins are busy flying in and out from their nests. By the river in Newnham, a Grey Wagtail investigated the waterside vegetation.

A massive effort was made to clear the invasive Floating Pennywort from the upper river last autumn. At one point, it had spread right across the river. Happily, there is no sign of it at the moment.

My spider of the month is Araneus diadematus.  This well known Garden Spider is generally associated with autumn, but at breakfast on May 18th, I found a newly hatched mass of spiderlings in a communal web.  Yellow and black, there must have been about one hundred of them, clustered together. When disturbed, they fell away on individual threads like golden raindrops and then gradually reassembled. Within a few hours, they had climbed up into the tree and disappeared. 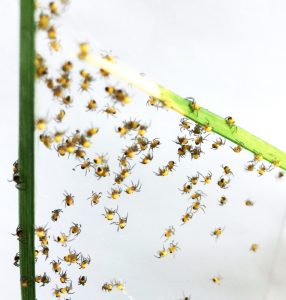 On 31st May, while swimming in the river, I saw a barn owl crossing the river to the Skaters Field nature reserve in Newnham. It was early evening and the owl was moth-like and white in the sunshine. I had been told that they were about, but this was the first time I had seen one.