I was wrong about the Common Terns not appearing this year. Two pairs were feeding along The Reach at Fen Ditton on 11th July and one pair headed off high due south with food, as if to feed young. I have never worked out where they breed, but this pair were heading towards Cherry Hinton Pits or even Hobson’s Park. 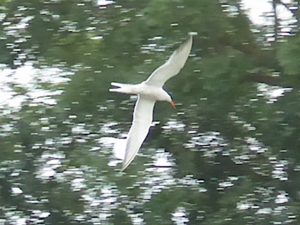 Reed Warblers were still feeding young on Ditton Meadows on 1st July, but where are the Sedge Warblers this year? Perhaps the “Beast from the East” stalled their north-wards migration this year. Some years ago, I photographed a Sedge Warbler at Little Wilbraham and only noticed on the photo, it was ringed; closer examination showed it had a French ring. Perhaps that’s where their migration north stopped this year.

I guestimate there are 10 pairs of Kestrels in our project area and perhaps the same number of Sparrowhawks. Jon Heath has a wonderful film on Twitter of Sparrowhawk chicks in a nest in the north of the City; Barry Sims has photographs of a nest in Romsey town (below). Sparrowhawks became extinct in Cambs in the early 1960’s due to toxic agrochemicals. They were extinct in the County for about 25 years but returned in 1985.

One Peregrine fledged at the second breeding site in the City (photo Richard Johnson). I guestimate five pairs of breeding Buzzards in our project area; in July, whilst watching the City Centre Peregrines, a pair of Buzzards were circling over the city in the same binocular view. Just five years ago I would not have thought this possible!

We have had no rain since the 29th May; in Queen Edith’s Way Goldcrests come to drink at a garden pond and “skitter” across the lily pads. A Garden Warbler is still singing in the Orchard in Milton Country Park, on the very northern edge of our project area and Chiffchaffs, Blackcaps and Song Thrushes were still in song in mid-July. Two territorial male Yellow Wagtails were located at a farm site also on the northern edge of our project area.

A Quail heard at night over the City is, I suspect, a first for the City and hints at the nocturnal movement and migration of birds that goes unnoticed.

Himalayan Balsam (above), an aggressive coloniser of river and stream banks, is well established in the south-west corner of Ditton Meadows. Eighty-Five Ivy Broomrapes were counted in the central reservation in Longworth Avenue and lots in St Giles (Ascension) Cemetery in deep shade, but none in Newnham College grounds this year.

Lots of Swifts are screaming over their nest territories. Interesting data from Clarke Brunt’s Swift nest boxes in Milton:

Thank you Clarke – I hope I have those figures correct! See – http://www.viridis.net/animals/swifts.html

The excellent photograph of the fledged Peregrine is by Richard Johnson – his Facebook page is: https:/www.facebook.com/Richard-Johnson-Wildlife-Artist-318774484888727/.

The photo of the Romsey Sparrowhawk with chicks is by Barry Sims. Thank you, Richard and Barry,