Sound recording night time migration over the City has produced sensational results (see August Blog: NocMig). Jon Heath set up his recording equipment in his garden in north Cambridge on the night of 28th August. The next day when he played back the recording, there appeared to be the call of an Ortolan Bunting at 02:57am. He set it up again the next night and, incredibly, recorded another set of Ortolan Bunting calls. He checked with other experienced bird call recordists and all agreed: Ortolan Bunting. This is likely the second and third records of Ortolan Bunting for Cambridgeshire and our project area after Simon Gillings, of the British Trust for Ornithology, recorded the first from his east Cambridge garden last year. These records add to the theory that Cambridgeshire and the skies above our project area may be an important migratory flyway highway for birds.

Ortolan Buntings breed in central Europe and Scandinavia and are rare east coast migrants, mostly in autumn. They have never been seen in Cambridgeshire; these are the very first records. Ortolan Bunting is known to be a nocturnal migrant and an autumn flight path over southern England was suspected after a sequence of recordings over Dorset in 2016. Both Simon’s and Jon’s records have yet to be ratified by the Rarities Committee of the Cambridgeshire Bird Club.

Whitehall contingency planning for a no-deal Brexit has been named after another bunting – Operation Yellowhammer.
Yellowhammers have become one of our most threatened farmland birds; I assume the names of the Whitehall operation and the status of Yellowhammers are intended! There are three breeding territories of Yellowhammers near the Histon Road/Huntingdon Road footpath close to the Darwin Green Development. 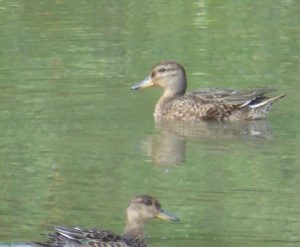 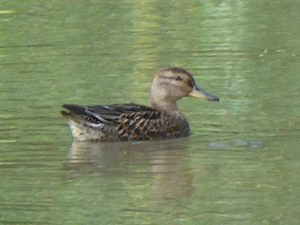 Local patch birding is a new enthusiasm amongst bird watchers …. as well as chasing rarities on the Norfolk coast! If I lived nearer to Hobson’s Park that would become my local patch. It’s a brilliant park in our NatHistCam study area, with a nature reserve established by the Cambridge City Council. It’s the best place I know for Corn Buntings and nearby, on 7th Sept, in small ponds by Long Road Bridge, there were two Garganeys; an unusual species for an urban location.

There were also two Yellow Wagtails, House and Sand Martins, the House Martins presumably from the Addenbrookes colony. What I like about Hobson’s Park is the “big sky”: Addenbrooke’s in the distance looks like a nuclear power station and the new low-rise development of Great Kneighton is on the opposite horizon! 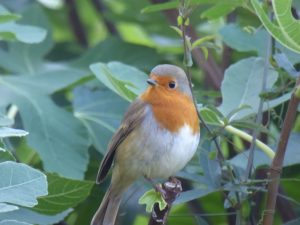 I have a new and very territorial Robin (left) in my garden. It spent two days attacking its own image in the kitchen window and eventually flew into the kitchen to sort out this competitor. He (probably not a “she” as the sexes cannot be separated easily) flew out of the kitchen in terror and now lives at ease with his own image …. very male!

I often wonder what lives on Elder (Sambucus nigra). The larvae of some moths do but I never see any evidence of eaten leaves. Text books say it’s especially frequent near rabbit burrows and badger sets because both species find elder distasteful. The berries often go uneaten but I saw a bush behind the Grafton Centre completely stripped of berries by a mob of Starlings, which I have never seen before. Maybe that accounts for its distribution as seedling and saplings appear everywhere presumably from flyover bird droppings.

During this (hottest on record) summer I often heard crickets. On a mid-August evening, I heard one on Castle Hill and then another outside my house in Chesterton, which I recorded. I matched the recording with an excellent free app called: iRecord Grasshoppers and related insects. They were non-native House Crickets (Acheta domesticus) and have been heard in Cherry Hinton, Trumpington and Grantchester. I have heard them before at Addenbrooke’s by the heating systems. I understand they are escaped food for pet reptiles and this hot summer has brought them out from torpor.

Watch flocking Long-tailed-Tits. The frenzy of the flock often attracts other bird species and its always worth a look to see what else has been drawn in. Flocks usually have a lead species – in the UK it’s often Long-tailed Tits and flocks may circulate around a feeding territory as a “bird wave”. In the tropics and semi-tropics these flocks draw in both aerial feeding species and ground feeders.

The Common Lizard colony at Orchard Park has a stay of execution. Development of the site may not now take place until spring 2019 and hopefully a translocation site will be found.