Most of my birding is done by sound not by sight, but it depends where you are. In the City, gardens and woodlands it can account for 90% of records, which can then be checked out visually: flyover Peregrines, Common Terns along the river, singing/calling warblers, thrushes passing overhead at night when they arrive from the end of September onwards, even when sea watching – passing waders and the distinctive flight call of some gulls, especially Mediterranean Gulls.

The New Birding is to set up sound recording equipment at night, in a quiet spot away from peripheral noise and capture the flight calls of night-time migrants. Records can be confirmed from listening to play-backs or converting sounds to sonograms and comparing these to standard samples for comparisons; it’s called NocMig! I have heard Whimbrels and Green Sandpipers over Cambridge on clear dark nights in August, but this new technique is more systematic. Highlights this July have included a Whimbrel, Quail and, remarkably, a Bittern over our project area. Now is the time for active wader migrations and, with or without recording equipment, it’s worth listening on clear dark nights (especially if the wind is from the north or east).

A day-time Whimbrel was recorded over Trumpington Meadows on 27th July (Iain Webb). It also confirms that  urban Peregrines hunt at night and the remains of over 100 species of birds have been found in their pellets, many of which must be on overnight migration e.g. Quail, Nightjar, Water Rails. 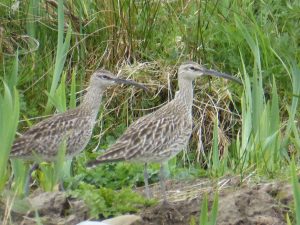 Until the late 1960’s the Cambridge Sewage Farm was THE local hotspot for wader watching – especially during the autumn and spring passages. I remember seeing and hearing my first Temminck’s Stint and Wood Sandpipers there. One rarity recorded was the Red-necked Phalarope. The latest edition of British Birds describes its migration, which must be one of the most remarkable. After breeding on Fetlar, Shetland, male phalaropes fly north and west to Greenland, then south along the east coast of North America to the Caribbean, cross central America to winter off the coasts of Ecuador and Peru …. and then back again the following spring! WHY? Did they start to do this before the continents moved apart, or because food and therefore breeding conditions were so much better in Shetland?! 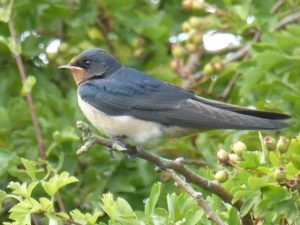 Most of our Swifts have gone; a few remained over Chesterton on 6th August. Swallows are still feeding young in Ditton Meadows (right) and Horningsea. Rooks may be having a tough time. They are birds of damp north–west Europe where they can probe soft earth for grubs and insects. 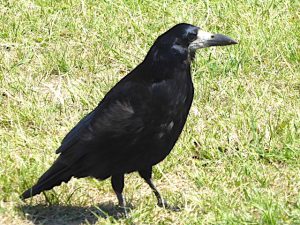 The baked soils due to the hot weather must have cut off much of their accessible food supplies. The Rookery count next spring will be a measure of how many Rooks survived this exceptionally hot summer.

A specific search for Meadow Pipits on agricultural land in the north of our project area found none. This is the first time in 30 years that no breeding pairs have been found. Meadow Pipits are Red Listed (50% population decline without any signs of recovery). I have no explanation other than loss of an insect food supply – in winter there is often a flock of 20+ birds. 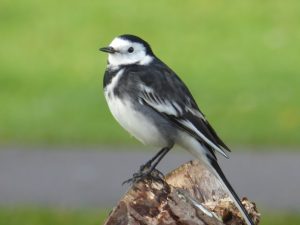 panying the Meadow Pipits in winter are Pied Wagtails (right). From now on they begin to assemble in overnight roosts. There used to be a roost of about 150 birds in the trees outside Carlucci’s Café by the Grand Arcade (Lion Yard!).

Left: You are being watched! Roe Deer in the north of our project area

Chiffchaffs and Blackcaps are still calling in the heat of the mid-day sun.

I hope this exceptional summer has been good for butterflies. The following photographs were taken in Chesterton at the end of July. The Butterflies of Cambridgeshire (Field, Perrin, Bacon and Greatorix-Davies) features the Grizzled Skipper on the back cover. This butterfly is now a County rarity but in the 1960’s and early 1970’s it was common on brownfield sites in the north of the City: Arbury and Chesterton.