As well as providing new insights his records also complement some daytime observations. I have very rarely seen Little Grebes fly – only scurry across open water in a panic – but they have colonised the new lakes at Trumpington Meadows, Hobson’s Park and Eddington so they must arrive on night time migrations. I have seen an adult Sandwich Tern being trailed by a begging juvenile over Vinery Road many years ago. On 31st October Simon recorded a big night time passage of Redwings, Blackbirds, Song Thrushes and Fieldfares; the following morning I saw many Redwings feeding on hawthorn berries along the river to Baitsbite Lock.

It’s not just night time recording that adds to our understanding of bird movements. At the same conference, Dick Newell described a Common Swift, satellite tagged in one of his nest boxes in Landbeach, which was tracked to Mozambique the following winter. This bird almost certainly fed over Cambridge and our project area.

Three wintering Blackcaps caught in the UK and with fitted with geo-locators were found to have come from: 1, Eastern France; 2, Central Germany/N Italy; 3, Western France. Bird No3 must have migrated due north to winter in the UK.

So, where do birds live? Do they live where they breed, where they spend their winter or in the migration locations in between? Bird distribution is governed by food supply. The current thinking is that many species originated in (sub-Saharan?) Africa and moved out to follow seasonal sources of food when their African food supply became limiting; 2.1 billion birds migrate between Europe and Africa.

A species of Willow Warbler weighing less than 10gms (the weight of a 50p piece) has been tracked migrating from far Eastern Siberia, where it breeds, to over-winter in Tanzania/Mozambique. This one-way migration of 12-13,000km is the longest recorded amongst songbirds; the following spring it returns over the same distance. This truly is survival of the fittest! 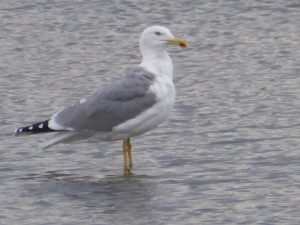 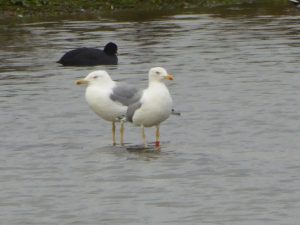 The pair of Yellow-legged Gulls, one with a red leg ring (below)

Most winters there an influx of an unusual species. Last winter it was Hawfinches, this winter early signs suggested Couses’s (Arctic) Redpolls, Waxwings and/or Rough-legged Buzzards. The few Redpolls that have been found are mainly coastal but a carefully look amongst Lesser Redpoll flocks – in the Alder trees by the guided Busway near the Regional College – is worthwhile, Waxwings in Helsinki is a good early sign they will appear in the UK, but few have turned up. A good spot for Rough-legged Buzzard (R-LB) could be on the rough fallow north of Eddington. There are two R-LBs in the north of the County at the Great Fen project. If Short-eared Owls and a Hen Harrier can occur on the fallow before the construction of nearby Darwin Green, then so could a R-LB turn up here.

A new species for me in our project area was two Yellow-legged Gulls (Larus michahellis) at Hobson’s park on 6th November. Rob Pople saw them there on 20th October and the same species was there on 26th November 2017, plus one on Emmanuel College Sports pitches (off Wilberforce Road) in July 2015. Other recent records: Coldham’s Common, June 2016 (Carlos Davies); over Cambridge Science Park in July 2018 (Jon Heath); and Hobson’s Park on Sept 19th this year. This species was first recorded in Cambridgeshire in 1987 when it was then considered a sub-species of Herring Gull (Larus argentatus michahellis). One of the recent birds has a red leg ring. The birds were adults, at least 4 years old; the leg ring should have a visible identification number but it was probably put on as a newly fledged chick and the number has faded. It was probably ringed in southern Europe, where they breed and where it is the common summer sea-side gull replacing the Herring Gull. Wintering north of their breeding range is unusual but now regular! 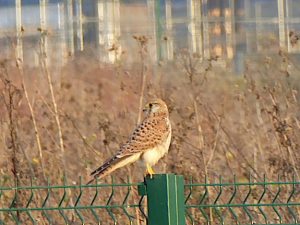 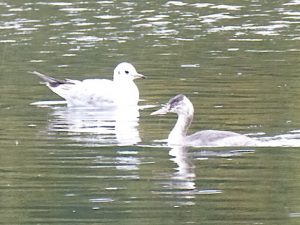 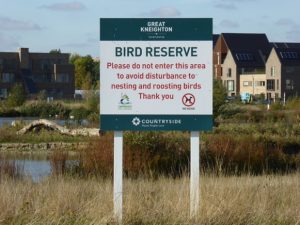 At Hobson’s Park a relationship between Great-crested Grebes and Black-headed Gulls can be seen: the gulls pick off edible material disturbed by the diving grebes; the same can be seen at Milton Country Park between Coots and Gadwall ducks.

A Common Buzzard over the Market Square on 27th October sent the pigeons scattering; 2 Grey Wagtails over Eddington and two Kestrels were hunting over fallow land to the north of the development on 5th November; a pair of Tree Creepers in Logan’s Meadow on 6th November; a flyover Green Sandpiper was heard near Fen Ditton on 8th November. Hobson’s Park attracts other species: on 9th November 9-11 Snipe around the lake margins is the biggest number of this species I have seen in our project area since they bred, with Redshank, in the wet meadows along the Fen Road up to the mid 1980’s; plus, a Stonechat and a Kingfisher. On 12th November 15+ Bramblings were recorded in the Beechwoods (Mike Foley) and a Bearded Tit at Trumpington Meadows on 15th November (Iain Webb) www.cbcwhatsabout.blogspot.com