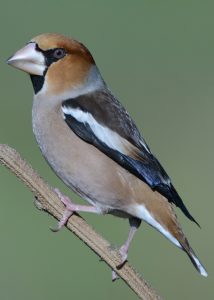 The Hawfinch is one of our most secretive and elusive woodland birds. In the 1950s they bred in the Botanic Gardens and along “the Backs”; in the 1970s and 1980s they retreated to the parklands near Newmarket. Now our nearest breeding birds are in the Brecks. In winter, they are tree seed eaters and, its claimed, can crack a cherry stone in their huge bill. This winter there has been an exceptional influx that has filtered inland from the east coast often accompanying Starling flocks. The reason must be a winter food shortage in northern Europe. Flyover birds were recorded over Lovell Road by John Heath on 16th, 31st October and 3rd November (about a dozen have been seen in Wimpole Park); doubtless more will turn up. They have a distinctive flight call – an explosive “tak” given on the up-beat of their strong undulating flight. Keep an eye open for them around Beech, Sycamore, Yew and Hornbeam trees in our study area.

A Chiffchaff in Logan’s Meadow on 1st November is probably an over-wintering bird. A Blackcap in Benson Street, feeding on Mahonia nectaries, is likely to be the first of our visiting wintering birds rather than the last of our summering birds; it was singing a very quiet and subdued sub-song. A Woodcock, disturbed in the evening of 1st November in Petworth Street, Petersfield, was an unusual record (Salim Algailani). Woodcocks venture into urban areas when temperatures freeze in the wider countryside and soils in gardens are still soft enough to probe for worms and grubs. I suspect this bird was an overflying night migrant that may have been hunted by our City Peregrines and fled to a nearest land fall refuge. Peregrine pellets found in Nottingham city centre from local nesting Peregrines have been found to contain bones of night flying migrants including Water Rails and Woodcocks.

The young Peregrine found wounded with .22 pellets just outside our project area, probably a bird from one of the City nest sites, is still recovering at the Raptor Foundation (See Olwen’s October blog). It might recover but may never be fit enough to hunt so, sadly, will be destined for a life in captivity.

Redwings have arrived in numbers (good places to see them: the winter lawns of Cherry Hinton Park and the Botanic Gardens); the first big flock of Fieldfares passed over Chesterton on November 1st. 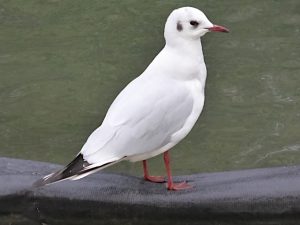 Black-headed Gulls have arrived to over-winter along the river from Riverside to Jesus Lock. There are few 1st year birds amongst the large majority of winter-plumage adults which suggests a poor breeding season.

The winter Cormorant roost in the willows opposite the Riverside chimney is beginning to assemble. 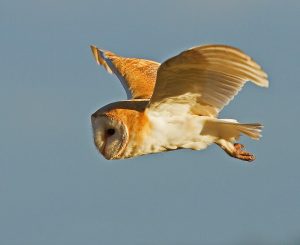 The land set aside for building development between Huntingdon Road and Histon Road, that has been fallow for about eight years, is now being landscaped and having access roads laid; sad but inevitable as the countryside is pushed further and further out. 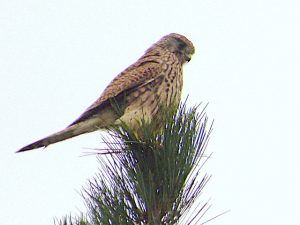 This year five Kestrels (two adults and three juveniles) regularly hunted over this site; over winter 15/16 four Short-eared Owls roosted there and over winter 16/17 a female Hen Harrier was present. In earlier years, Merlin hunted for Skylarks.
Kestrel – Huntingdon Road (above)

Barn Owls (see Neil Sprowell’s photo above – Cambs Bird Club Gallery) are seen there regularly and have been present on this northern edge of our study area for the last 60 years at least! The Barn Owls and Kestrels will probably remain but will be forced further out.