Failing light and falling leaves…. As everything prepares for winter, where do all the beasts go? A group of us visited the Sanctuary Nature Reserve to see what we could find. This is a small privately owned reserve accessed from Adams Rd, with lake, footpaths and mature trees. (Membership queries to J.J.Hall, jjh10@cam.ac.uk.) At the entrance of the lane was a large double bracket fungus, Phellinus igniarius. The growth layers showed it had been there for 5-6 years, growing on the bark of dead elm.

Many invertebrates tuck themselves away under bark or leaves, in the soil or under stones. Several were found by beating the low vegetation. In a yew tree we found a female green crab spider, Diaea dorsata and a smaller male in the grass. 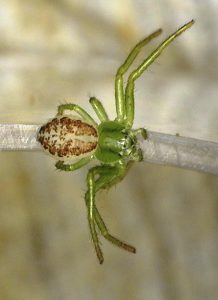 In some brambles, there was a parent bug, Elasmucha grisea. These attractive shield bugs are so-called because the female broods the eggs and nymphs. 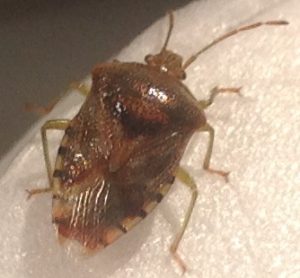 We also found a harvestman, Parolophus agrestis, in the nettles. We had been looking for harvestmen earlier in the month and found both this species and Nematostoma bimaculatum. Not all harvestmen are huge – Nematostoma is only 2.5mm body length, with quite short legs. 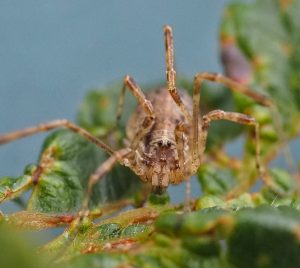 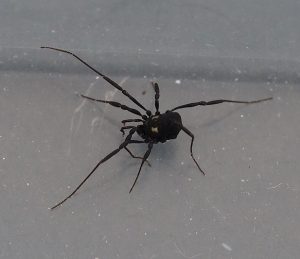 Muntjac are known to be around but we have had very few actual reports. At least one pair are grazing the ivy ground cover in Adams Rd, they are a pest in Barton Close gardens and also in the Hills Rd area. Have you seen any? I used to think they could be excluded by a reasonable fence, but apparently not! This one was caught on camera at 3.15am, near Fulbrook Rd in W Cambridge. 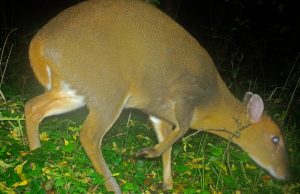 Other late autumn insects reported included a red admiral butterfly feeding on flowers, a buff-tailed bumble bee queen and a common wasp Vespula vulgaris, found accidentally on my bedroom curtains! Doubtless a mated queen looking for a cosy over-wintering refuge, she stung my finger and it was very sore for 3 days. I escorted her outside again. I also came upon a median wasp Dolichovespula media in a forsythia bush. (There are about 7 native species of large social wasp, this one having a short yellow face and 4 yellow marks on the thorax. It was first recorded in UK in 1980.) 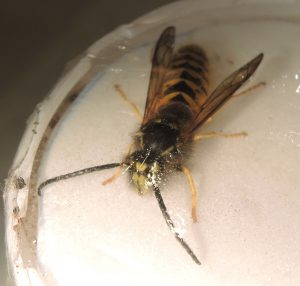 Fieldfares and redwings have arrived, though not in huge numbers. A heron is said to have been enjoying the goldfish in the pond by the flats in Highsett, until they were re-homed so the pond could be mended. Val Neal, who regularly rows on the river, reports a family of four little grebes (dabchicks) on the river by Fen Ditton. A green woodpecker was seen eating ants on the grass in Chesterton and I frequently hear them calling around Newnham. In the boggy part of Skaters Meadows in Newnham, we disturbed a snipe. Parties of 12-15 long-tailed tits work their way along the river, presumably finding insects in the vegetation. Then, on Nov 21st in mild weather, a song thrush was singing at breakfast time.

Mark Powell has identified a lichen (Leptorhaphis maggiana) new for the county, growing on hazel in Arbury.  It is a small and inconspicuous smooth dot growing on the bark.  Previously thought to be very rare in the UK, this is the third county in which Mark has found it, so it may be spreading.

Roger Horton asks for information about black poplars Populus nigra betulifolia, now increasingly rare. The female trees have white downy seeds, while the commoner males produce dark red catkins. He would like to find any that he may have missed in our area. See http://www.essexbiodiversity.org.uk/species-and-habitats/trees-and-plants/black-poplar for more information. 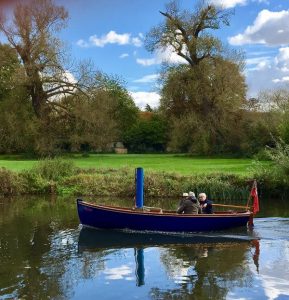