Many thanks to Jon Heath for his recent Moth Blog! This is an area I have not (yet?) ventured. Paul Rule also uses light traps and in his first season, has clocked up more than 190 species of moth and micro-moth. In addition, all sorts of other beasties turn up there: an 18-spot Ladybird appeared on 5th October – a mature Scot’s pine specialist! An Ichneumon Wasp, Ophion luteus, was another bonus visitor. 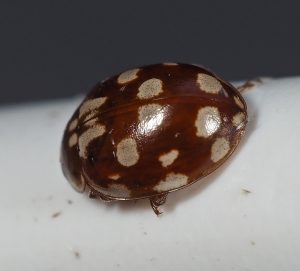 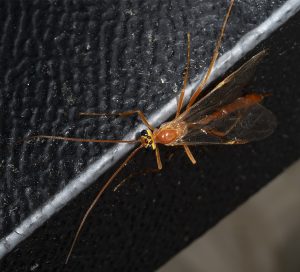 Then there were a couple of Gall Flies, Tephritis divisa and Tephritis formosa.  First recorded in Sussex in 2004, T. divisa would appear to be yet another species expanding its range northwards. This is its first Cambridgeshire record. 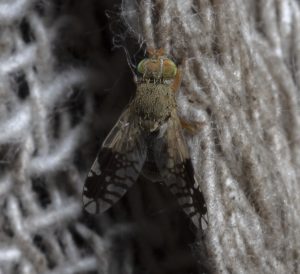 A tiny Sisyra dalii (a Spongefly) 4mm length, was the next visitor. Their larvae are aquatic and feed on freshwater sponges. Related to lacewings, they were completely new to me. 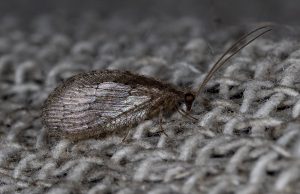 Next was the Giant Willow Aphid Tuberolachnus salignus (‘giant’ in that the body was 6mm and overall 1.2cm, so pretty large for an aphid!)  Finally a minute 4mm green Spider, Nigma walckenaeri, appears to have taken up residence in the moth trap. 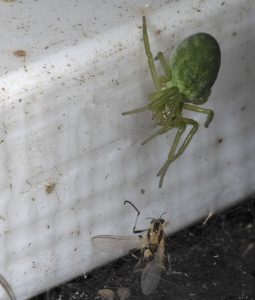 On 10th a Carrion Beetle Nicrophorus humator – the Black Sexton Beetle was found at Holbrook Rd.  As its name suggests, it buries the mammalian corpses that provide food for its offspring. 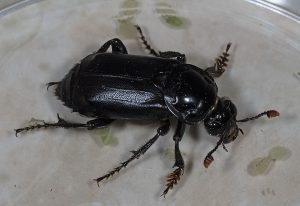 By October, most Dragonflies have gone to bed for the winter, although some are still around,  mainly Common Darters and Migrant Hawkers. The once abundant Willow Emeralds have now all vanished.  At the country park in Great Kneighton, a number of very young saplings and shrubs had large white cocoons on the branches, harbouring numerous small caterpillars of the Brown-tailed Moth. 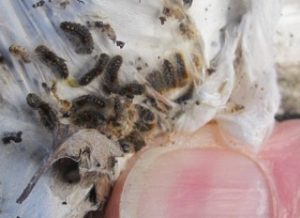 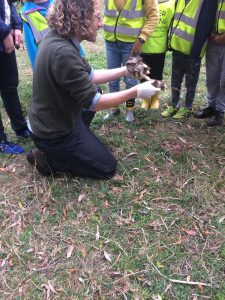 Again in Newnham, a neighbour was concerned to see what was digging up the grass in the back garden. Expecting badgers, we set the camera trap, but found only a visiting Fox. 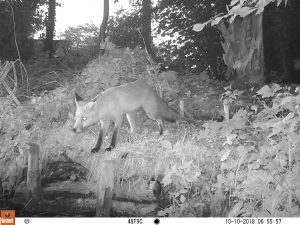 A Hedgehog was seen trundling along Blossom St near Broad St – thanks Val for that one. Then on 8th Oct, Jackie saw a Heron on the towpath near the Jesus lock, which had caught a Rat by the tail.  The rat was squealing and twisting itself around the heron’s beak. The heron was too intent on the victim to notice the gathering crowd, but eventually the rat broke loose and escaped. I am told this particular heron regularly stands behind the fishermen here!

During the October field studies, Oxalis triangularis was found on disturbed ground on a bank at the edge of Stourbridge Common – a county first. It has been a generally poor year for fungi, but maybe the rain will help.  The very distinctive Magpie Mushroom was found in the Botanic Garden – thanks Jonathan. Lactarius pubescens Wooly Milkcap fungus in grass and Skeletocutis (Incrustoporia) semipileata on the stump of a weeping beech tree are both fungi associated with birch. The latter was a tough flat pancake polypore, about 2cm depth and 8cm diameter, oddly with the pores facing upwards. 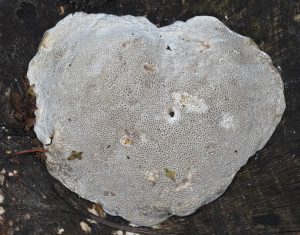 There is currently a national survey of Tawny Owls. June reports that the tawny owls always heard in Chesterton since 1974 have sadly disappeared in the last two years. However, reports of a male from Cherry Hinton and both male and female in Newnham are encouraging. At Great Kneighton, a Meadow Pipit flew into the glass surrounds of the new balcony. Stunned initially, it recovered and was released.  Other birds mentioned were Pied Wagtail (Alec) and 3-4 Little Grebes near The Plough at Fen Ditton (Val). 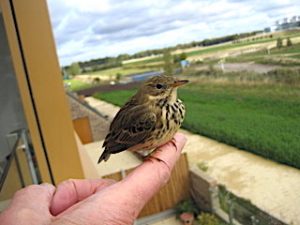 6-7 Fieldfares were spotted on 22nd and Starling murmurations over Bolton’s Lake and near the rugby club (Jill). It has been a great harvest year for Sweet Chestnuts and Walnuts and there is a huge crop of Haws for the visiting thrushes, as we prepare for winter.