Lots of volunteers this month!  Thank you to all contributors.

Birds! One observer reports an adult dark bellied Brent Goose with a Greylag flock on Pond 1 at Hobson’s Park, next to Addenbrooke’s. It was ringed, but its origin is not yet known. Locally, the first sight of a couple of fieldfares, feeding on hawthorn berries, indicates the onset of winter. Similarly, the early morning and teatime noisy flock of rooks and jackdaws are a winter treat. They are keen to see off any passing buzzards. An early morning rower describes two sightings of a kestrel along the river to Fen Ditton, a heron, a pheasant, ducks, swans, moorhens and also cormorants flying, diving, surfacing at different places along the river. In Newnham, our pair of swans still have 7 of their original 8 cygnets, so are doing well. On a more sombre note, a juvenile peregrine is in rehab, having been shot with ˑ22, recovery uncertain. This is likely to be a locally bred bird. I will not add Bob’s comments on the perpetrator.

One quite accidental finding was the pupa of the Orange Ladybird – we were identifying trees and found it on the leaf of a field maple. I have never seen the adult, which is orange with 12-16 white spots, but the pupa is unmistakable, black with yellow markings. 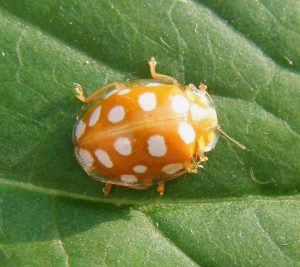 The UK Ladybird Survey states: “Considered an indicator of ancient woodland until 1987. Has become widespread since it became common on sycamore trees. Recently has also moved onto ash trees and appears to be increasing in abundance”.  The site was along the footpath to the Grantchester Meadows, an hedgerow possibly 500-600 years old, as are many of the hedges in W Cambridge.

At the beginning of the month, there were quite a few fungi – Stinking Parasol (Lepiota cristata), Wood blewit (Lepista nuda), and Slippery Jack (Boletus badeus) on the playing fields and in Paradise a beautiful patch of Honey Fungus (Armillaria mellea) and Chicken of the Woods (Laetiporus sulphurous). Then the warm weather returned and most things have disappeared again.

Another sign of the unseasonal weather – Ivy Broomrape has appeared in Chesterton, most unusual in October, as they are said to flower in June/July. These plants are parasitic and totally dependent on the roots of ivy plants, having no chlorophyll of their own. 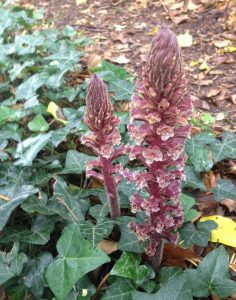 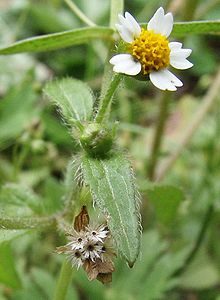 Another unusual plant was the Shaggy Soldier (Galinsoga quadriradiata) found on the allotments at Empty Common. Introduced in 1909, it appears to be spreading and apparently likes allotments. It has daisy-like flowers and leaves with coarse hairs. (Quatriradiata seems an odd name for something with five main petals!) 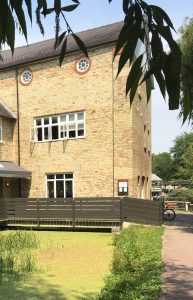 Roger Horton has been doing some detective work: “The first I noticed was a red bloom on the duckweed in the race at Newnham Mill. It didn’t take long after that to trace Water Fern (Azolla filiculoides) to Crusoe Bridge and Laundress Green. Taking advantage of a bright autumn morning, I followed the trail down river as far as Baits Bite Lock, encountering on the way a dense growth of Floating Pennywort at Fen Ditton, near the railway bridge. Next day, upstream the fern was evident at Byron’s Pool and further up at the crossing of the M11. This spans the entire length of river in the NatHistCam area!”      Another invasive alien in the Cam has to be bad news – the Pennywort is back with a vengeance, in spite of major efforts to remove it last year. 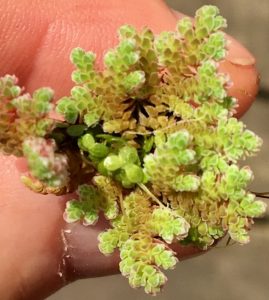 Muntjac are often sighted in the city, with reports from Hills Rd and also from Grange Rd, where one was found dead after being hit by a car. A black squirrel was seen in Chesterton – we are interested in any more reports of this melanistic variant. Reports of hedgehogs continue to arrive – most recently in Glisson Rd, found dead (it should have stayed in Highsett Gardens!), in Arbury, where two lucky ones turn up for mealworms and sunflower hearts every evening and several in a garden in Chesterton following release from the sanctuary.