The City centre Peregrines have reared two chicks. One fell onto the pavement below and was rescued. The second chick is fully feathered and now glowers down onto the street below waiting for the parent birds to return with prey. 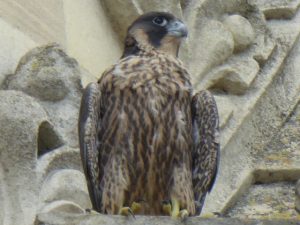 The second city pair has two healthy chicks. At the beginning of June a dead Buzzard was found close to their nest site. At some nest sites Peregrines have been seen to kill Common Buzzards – presumably they see them as a predatory threat. This dead Buzzard appeared uninjured and on close examination turned out to be a Honey Buzzard!

Honey Buzzards are rare breeding birds with about 50 breeding pairs in the UK and very occasional annual passage migrants over the City in the first weeks of May. A June record is exceptional. Could this be one of a pair that is breeding locally?

The Peregrines at this second city site often nest with a pair of Kestrels and Stock Doves nesting closely nearby without any apparent antagonism!

A female Black Redstart has been seen at a central City location – no male has been seen or heard so it’s likely this lone individual is an unpaired female on an early return migration. But its show they maybe about in the City; central Cambridge, around the colleges and churches, is a likely location.