What do plants and their leaves do in autumn? Mostly, change colour, go spotty and fall off, I hear you say. Therein lie a number of interesting stories. Sam reports, “I found galls of the mite Aceria tristriata on Walnut Juglans regia in Chesterton. This is a very local species, and apparently new to Cambridgeshire, according to the British Plant Gall Society.” I was curious about the term “mite” and found they were minute maggoty things, indeed arachnids, but with only 2 pairs of legs. (In the first picture A. tristriata has caused the smaller pustules, while the larger brown patches are remnants of galls of a much commoner mite, Aceria erinea.) 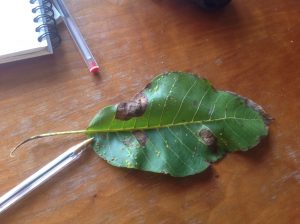 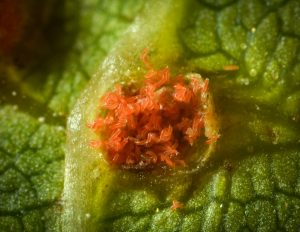 Then Mark Hill found Gymnosporangium sabinae (European Pear Rust) in Cavendish Ave. It produces very conspicuous yellow, orange or red leaf spots on the upper side of the pear leaf, with bumps followed by conical structures below. Chris Preston has since found it in a few other sites in Cambridge and there is some in Newnham. Can you they can find any on your local pear trees before the leaves fall? A photo with details of the site would be great, either to me or him (<cdpr@ceh.ac.uk>). It is one of the rusts with an alternation of hosts, two stages of the life cycle on pear and two stages on junipers (usually cultivated bushes). Does anyone have has any experience of it on juniper, where it produces gelatinous orange masses on old twigs (most conspicuous when wet)? These are probably produced in spring but there are very few British records from juniper and none from Cambridgeshire. (The only juniper I can think of is in the Botanic Garden, but there must be more.) 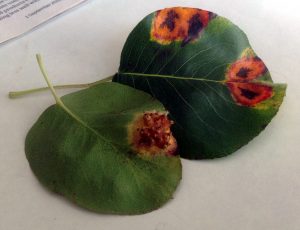 It has been a strange year for many plants. May found a mature Rowan (Mountain Ash) tree had lost half of its leaves by June, but with some watering it revived and in the middle of September burst into bloom at the same time as the fruit was ripening. 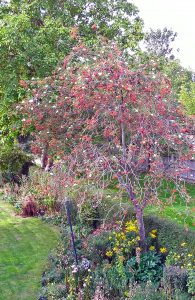 It has also been a great year for apples, hops and particularly walnuts, where even the crows and the squirrels are overwhelmed.  Sue reports an oak tree where nearly all the acorns have been turned into Knopper Galls – a parasitic wasp is the culprit here.

This lovely moth (Angle Shades Phlogophora meticulosa) was found indoors and released, while the Goat Moth caterpillar (Cossus cossus) was ambling across the towpath. Thanks Peter for these. 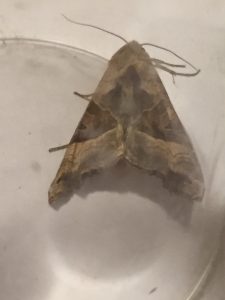 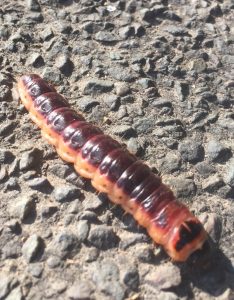 Pam noted a Speckled Wood butterfly and a late dragonfly in the garden at the end of the month. I had a visit from a Western Conifer Seed Bug (Leptoglossus occidentalis).  This Leaf-footed Bug resembles a shield bug, but is much bigger and has expanded hind tibias, hence the name. It is another new-comer, a US native only found in UK since 2007. Its larvae attack the immature cones of several conifer species. 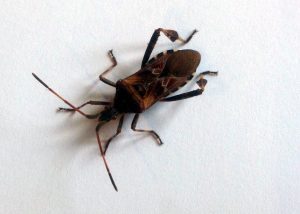 Paul reports Ivy Bees (Colletes hederae) enjoying the late flowering Ivy. This solitary bee was new to science in 1993, arrived at UK in Dorset in 2001 and has been slowly spreading north since then. It is the latest solitary bee to emerge and on the wing as late as November. Mark reports seeing dozens, burrowing into a steep bank. So if you have nearby ivy in flower, check it out – you will find all sorts of other insects there too. 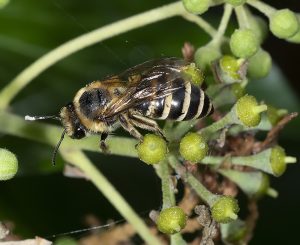 A quiz from Mary: which one of these is a Hornet (Vespa crabro) and which the hornet mimic Hoverfly Volucella zonanaria? Both were feeding on ivy.  V. zonanaria is the largest hoverfly in the UK, another fairly recent addition to the UK fauna, very rare before the 1940’s, but now common in the SE and spreading northwards. CLUE The Hoverfly has much bigger eyes and smaller antennae than the Hornet (also has no sting, but then male hornets don’t have a sting either). 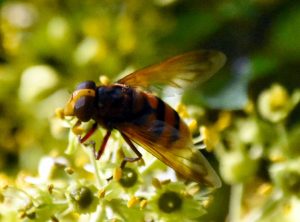 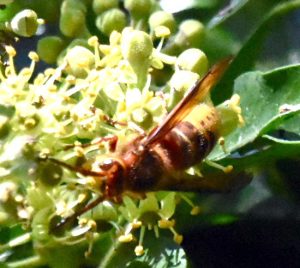 A dead young Badger on Grange Rd and the presence of a badger latrine on one of the local playing fields reminds us that these nocturnal mammals can flourish in suburbia. Newnham college has had a colony for some years and several of the College Head Gardeners say that they have been seen in the grounds.

We should not forget the river. Guy reports that electrofishing the Rush Stream (Sheep’s Green) produced two mature Brown Trout 260mm, so potential breeders! Also a 600mm Eel on her way to the sea, Spined Loach, Bullhead and lots of Roach, Perch, Minnow, Chubb and Dace of all ages. Kingfishers were seen taking advantage of this lovely small stream and its other new inhabitant is a Terrapin! A recent bat punt through Sheep’s green and Paradise detected two Noctules, several each of Soprano and Common Pipistrelles and four Daubentans, with a bonus of a bat-hunting Sparrowhawk low over the punt. However, I gather that the Cambridge Angling and Fish Preservation Society have given up having matches in the Cam because the fish have all gone – they blame this on the recovery of the Otter population, which have even found their way into Robinson College lake to feed on Swan Mussels. 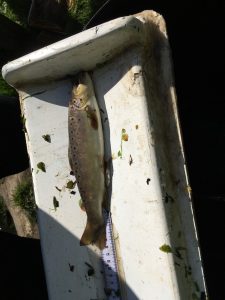 For many years, there has been a flock of white (feral domestic) Geese in Newnham. Originally more than 20, they are now down to about 10, with one succumbing to a recent killing and BBQing on the bank. The scorched remains were not a pleasant sight. They are quite inbred, some with a genetic wing disorder preventing flight. Val reports the dramatic appearance of a male Sparrowhawk, which landed on the balcony while they were still in bed. I heard an Osprey calling from the other side of the Cam, but did not get a view. Then the next day, out at Beechwood Reserve in Wort’s Causeway, I saw a Hen Harrier, perhaps on migration, quartering a field of stubble. Never mind all these big raptors! Susan reports the sight of a flock of around twelve Long Tailed Tits, together with four juvenile Blue Tits descending on the feeders, where they fed feverishly for about ten minutes and then flew away, never to be seen again. A similar wave of mixed tits swept over my breakfast chair in the back garden today.

On the local river, Swans with five cygnets had spread themselves over the footpath in Paradise. But the best news is that the Paradise Rooks are back! At 6.23am on Sept 23rd, the first winter flock appeared and summer is officially over.