Lots of comments from observers this month. Even in the middle of the city, wildlife can be found – in this case a verbena plant in a tiny crack in the pavement by the John Lewis store. 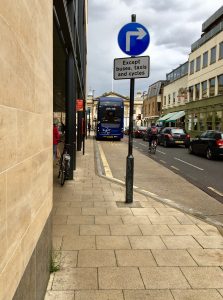 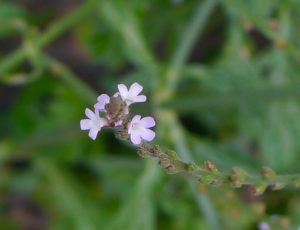 Five common buzzards were seen together from the Huntingdon Rd area and a group of three sparrowhawks were observed circling above Owlstone Rd, Newnham. Late butterflies at this site included several large whites and two red admirals. At Addenbrooke’s Hospital, an area of grass has been damaged, the suspected culprits being badgers in search of chafer grubs, as at the Botanic Garden. Finally, several baby toads appeared in a Chesterton garden.

One of our current surveys is of tawny owls and on the night of 11th, I heard a male calling in the middle of the night, near to the river. The male and female have a duet – she says “tuwhit” and he says “too-whoo”, so the two calls may be heard either together or separately. Please let us have details of any more!

At the allotments, it has been a good year for apples. However, gone are the days when many had damage from grubs, as we have eliminated most of our insects. I did see a 7-spot ladybird and also a rather sleepy noonfly, Mesembrina meridiana – one of the largest blowflies, with orange patches on the wings. It is one of the many flies which breed in and depend on cattle dung. 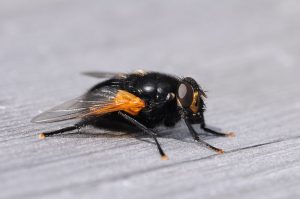 On Sept 13th, the City Council and Environmental Agency carried out electro-fishing of the newly regenerated brook – The Rush – which runs between the main river and the Newnham millpond across Sheep’s Green and under Fen Causeway. What had been a sluggish and overgrown stream is now running freely through a narrower channel and a fish gate has been installed at the top. I went to see what was happening and talked to a fisherman on the main river who had just caught (and then lost) a perch. He was using mealworms as bait and said he was hoping for dace or chub

At the brook, one man carried a loop attached to a battery, which delivered a weak electric shock in the water, followed by two with nets to scoop up the ‘catch’ for counting and measuring. By the time of counting, the fish were very frisky and were returned to the stream. 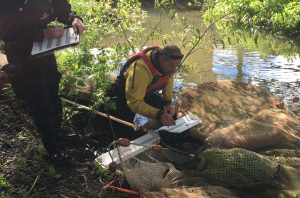 Counting and measuring fish at The Rush stream

The whole stream was fished twice from the millpond to the river.      I was surprised how many fish had been caught. I saw about 40-50, but the total for the two runs was 203, which meant there were about 20 fish per 10m stream. Most common were gudgeon (bottom feeders) and dace, with numerous perch, chub, roach and minnow, occasional pike, 3-spined stickleback and eel. They ranged in size from 4-15cm (2-7in). In the process, a larger eel had also been spotted, but not caught.

Earlier, the team had found and briefly captured a grass snake, before releasing it into the brook. Note the yellow collar, distinguishing it from an adder. Guy Belcher (in the picture) mentioned the offensive smell on his hands after handling it. 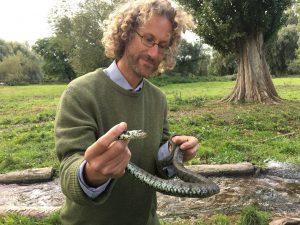 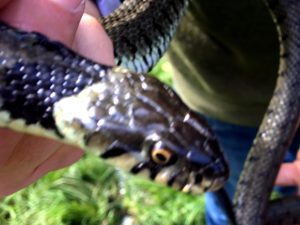 Nearby, a willow, in apparently poor condition, was secreting a sticky sap that was attracting both Harlequin ladybirds and also wasps, which were feeding on the trunk. Periodically, a hornet circled, hunting the wasps, catching them in the air and biting off their heads!

On September 17, at 11am, the air was alive with noise – the rooks and jackdaws were back in the trees by the river at Newnham. It sounded just like the first day back at school. Rooks – enormously social birds – form large flocks in the winter, with gathering sub-stations like the Paradise woods and a huge roost at Madingley. In the summer, they hardly appear here at all, but spend their time at their rookery where chicks are raised.