An excellent article by Paul Brackley in the Cambridge Independent (Jan 3-9th 2018) talks about how ineffective governance is a threat to biodiversity. He also mentions how targeted recovery programmes by conservation charities e.g. the RSPB and the Wildlife Trusts have helped rare birds re-establish thriving breeding populations. It got me thinking: what is Cambridge City’s balance sheet – winners and losers of breeding birds over the last decades? It is one of the questions our NatHistCam project will explore, but for birds the stories are reasonably well known.

The bird story is good: probably more winners than losers. Let’s start with the losers. The main losers are specialised woodland species which fits into a national pattern, not just Cambridge. Hawfinches which once bred in the Botanic Gardens and along the Backs are long gone. Lesser-spotted Woodpeckers (LsW), once our commonest woodpecker and in the 1980s often seen in Romsey Town gardens and orchards near Histon Road, are gone. So have Spotted Flycatchers which bred in Whitehouse Lane off Huntingdon Road and went when the Elms died from Dutch Elm disease. The LsW is  sparrow sized and may have died out from predation by Grey Squirrels or from the larger Great-spotted Woodpeckers. The Lesser Redpoll, a finch of cool northern pine forests, has gone; the last confirmed breeding in the City was in 2002. Nationally this small finch has withdrawn north and west probably as warmer summers have disrupted its insect food supply to chicks in the south of its range. 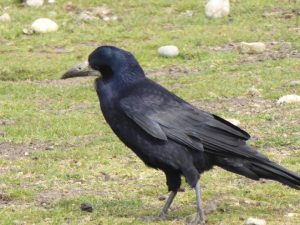 Our Rook survey has shown that numbers have dropped in the City by 90% since the 1960’s; rookeries along the Backs and in college gardens in west Cambridge have gone. Rooks are birds of open farmland and pasture and their decline mirrors the decline in numbers of many bird species in the farmed countryside. A major shift in farming from spring crops to winter crops from the late 1970’s ended the availability of over-winter weedy stubbles as a source of food. Our local Rookeries are now on the northern and eastern edges of our project area adjacent to neighbouring farmland.

Now for the plus side! Other corvids are doing well, probably due to less persecution. Most morning I’m woken by the belly-aching croaks of Carrion Crows. For several years a pair nested immediately above the Mill Rd/East Rd junction – probably the most polluted part of the City! After food fairs on Parkers Piece, up to 60 can be seen clearing the dropped food and takeaways (likewise early mornings). Magpies and Jays are now frequent garden visitors.

The Little-ringed Plover is an enigmatic species that colonises temporary wet sites around gravel and sand workings. It used to breed regularly in Cherry Hinton but the site became the David Lloyds Health Centre and a Holiday Inn Hotel. I recently heard birds over the Eddington development and it has cautiously re-established in Trumpington.

Grey Wagtails have become common across the City, not just near waterside habitats. I’m sure a pair raised young on the rooftop of M&S in the Market Square in 2017. Woodpigeons now breed commonly across the city (perhaps the countryside is too full of them!). They are one of the few species that can rely solely on vegetation to feed their squabs (or is it squibs!) and do not need high protein insect food to raise their young. 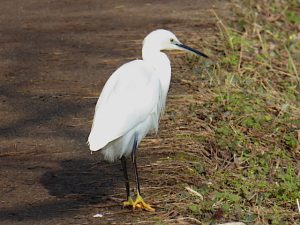 Little Egrets can now be seen across the city wherever there is open water or a stream. Another wetland species, the Cetti’s Warbler, can now be heard in the ditches in Barnwell in the shadows of Cambridge United’s football ground. The number of overwintering Blackcaps continues to increase. Lapwings attempted to breed on the northern edge of our project area, the first time for at least 50 years in 2017 and may do so again in 2018.

The real success has been in birds of prey, as Duncan’s photographs of Buzzards over East Road show. Peregrines were thought of as rare birds of rugged cliffs and haunted moorlands, but there are now more Peregrines breeding in our project area than on the Shetland Isles (2 v 1!). Buzzards have arrived in the last 15-20 years; they probably do not breed in our project area but certainly do on the very northern edge. Red Kites have successfully bred in our project area and may also account for the “eagle” seen in a Cherry Hinton garden! Sparrowhawks are now as frequent as they have ever been (they were extinct as a breeding species in Cambridgeshire from 1960 to 1985) and breed in the very centre of the City in college gardens. As an example of just what can happen if habitat is right, the area in the City boundary between Huntingdon Road and Histon Road (that is now being developed as Darwin Green) was left vacant for about nine years. In that period a big population of Field Voles established. Over-winter 2015/2016, up to four Short-eared Owls and over-winter 2016/17, a female Hen Harrier hunted over this area. In the past Merlin has been seen here. The problem is that alongside the presence of these wonderful birds of prey comes illegal persecution.

What of the future? Grey Partridges are holding on in the farmed margins of our project area with two breeding pairs in the north. But the population faces extinction in the south due to development near Nine-Wells. Stonechats may become breeders in the new country parks around Trumpington. Firecrests, might, just might turn up and breed; they like Holly bushes in winter and Douglas Firs to nest!

What have I missed?