Working on the allotment, I became aware of the clacking noise of Fieldfares, which I thought had gone for the year. Shortly afterwards, a flock of 25-30 flew in ragged formation towards their summer home in Northern Europe.  A Little Egret flew lazily over – a smaller white version of the herons who continue their noisy nest-building. Then a pair of Sparrow Hawks wheeled overhead, temporarily silencing the songbirds. Song thrush, blackbird, robin, wren, great and blue tits were all competing for airspace, while rooks, jackdaws and great spotted woodpecker drumming provided the accompaniment. Then, a week after the fieldfare departed, I heard my first spring migrant, a Chiffchaff calling on March 13th. 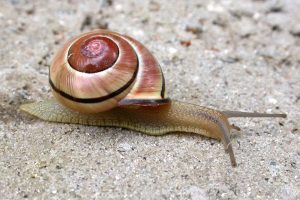 Suddenly the slugs and snails are active.  My Iris unguicularis (the lovely purple spring ones) were savagely mauled overnight and a replete Brown-lipped Banded Snail (Cepaea nemoralis) could be seen retreating for the day after a busy night!

A bumblebee queen appeared at breakfast in the back garden – still too dark to see which species and she did not stop.  Also found this week was an Ichneumon Wasp, Amblyteles armatorius, in shiny black and yellow livery.  These are fairly common, especially on flower heads in summer.  Spring is upon us! 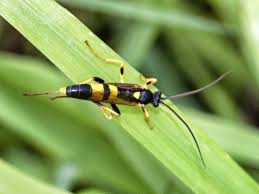 Spider of the month is Salticus scenicus, which have just emerged from winter hibernation. Otherwise known as Zebra or Jumping Spiders, these tiny spiders love to hunt on the sun-warmed brick wall in my back garden.  They can be very tame, jumping onto clothing or hand to investigate, but are impossible to catch. They have superb vision with four enormous eyes in a front row, two small ones a little further back and another two large ones behind these.  All round vision enables them to stalk and hunt prey without becoming the prey of something larger. 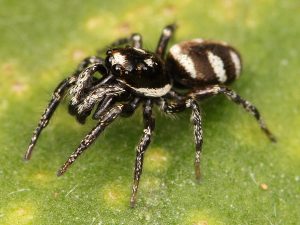 Frogs are active too, though sadly none in my pond for the last couple of years.  Have they deserted West Cambridge?  I have common newts and occasional toads in the garden.   Do you have anything to report?  Let us know!