During our survey of mammals in Cambridge, one surprising finding made me think hard about what is happening to our cities. Badgers used to be rather a rarity around Cambridge. When, in my youth  I went off badger watching, it was always to some well known hot spot, where large sets almost guaranteed a good evening badger watching. We went especially in the spring, when the stinging nettles had not grown too tall and the set could be viewed in the dwindling light of an April evening. If you were lucky and kept very quiet, the adults would emerge around 9 pm. On really good evenings cubs would follow the adults to play in the last glimmers of the rapidly fading daylight. But these sightings were always to be had out in the countryside. We had heard of urban foxes, but never urban badgers. 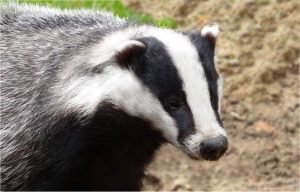 You can imagine my surprise when, as part of our surveys, badgers started to turn up in the city. I cant possibly say where they were found, because Badgers rely on a bit of secrecy to have a reasonably undisturbed life. But it has been amazing to find that in the centre of Cambridge there is a thriving badger population. Within a mile or so of the market square, there are no less than 6 badger sets. There may well be more, as these are just the ones we have discovered. I will not be surprised if one day we get reports of badgers wandering into one of the city centre stores, much like the urban fox that wandered into Mackay’s tool shop in East road a few years back. Over all in Cambridge, within the Nathistcam study area, which is 8kmx8km, there may well be more than a dozen sets. But people are very reluctant to divulge the location of their resident badgers, for fear of disturbance.

So what are they eating and how do they get around mostly undetected? The natural diet of rural Badgers consists of a wide variety of foodstuff, and depending on the season, different resources are exploited. They are omnivores and will eat both plant and animal food. In the countryside they eat earth worms as the staple of their diet. In spring I have found the remains of bumble bee nests raided by badgers in ancient woodland. They dig up the nests and eat the grubs. They also go for other invertebrates like slugs and beetles and many forms of insect larvae. You can sometimes hear them crunching snail shells to get at the tasty escargot inside. Amongst the mammals, they will scavenge carrion, and will eat Rabbits, mice and voles and are gaining a bad reputation as a possible cause of the declining hedgehog population. Apparently all those spines are no defence against a badger. They also eat a lot of plant food and I have seen the results of badger raids on bluebell bulbs, but lots of other vegetable matter is also consumed. So they are opportunists who are able to take advantage of whatever comes their way.

In the city environment, the few studies that have been done have found that human sources of food feature strongly in their  diet. Pet food put out for pets or hedgehogs will be eaten and many people, on realising there are badgers in their garden, will start to put out food expressly for them. They can however be quite destructive and will dig up garden plants to get at the succulent roots, raid vegetable patches and have a go at any bird tables that are low enough or flimsy enough to provide a good meal. Fences don’t keep them out as the badgers can dig underneath very rapidly. All this good living means that urban badgers can survive in much smaller territories than their rural cousins, sometimes just a few acres will do. One thing we have discovered is that where ever badgers have been reported, hedgehogs seem to be absent or scarce. So clearly the two species do not live together very well. The hedgehog is just too easy to catch.

Water can be a limiting factor for populations in the countryside, and often they will move set during the summer to be closer to a water supply. In the city, there is normally plenty of water, either from ditches and streams or from garden ponds or bowls of water put out for pets.

So it seems the badger has come to Cambridge in a big way…..Have you seen any badgers or even had them in your garden? Do let us know using the reporting page of this website: