One of our most exciting spring migrants is the Hobby, a swift-shaped falcon. Satellite tagging has shown they spend their winters catching termites in Mozambique. One or two pairs probably breed on the edges of our project area; hunting birds are often over the City and were recently seen over Huntingdon Road and Chesterton. In the early 1960’s this species was confined to the New Forest and Dorset heaths. Slowly, it expanded its range and by 1964 there may have been 1-2 pairs nesting in Cambridgeshire. Until the 1960’s this species was a target for bird nesters. It uses disused crows nests and is faithful to suitable breeding sites; a breeding site in the north of our project area has probably been used for the last 25 years. It nests late and entire clutches were stolen to order. Once taken the birds did not usually lay again and if they did the eggs were often stolen for a second time.

The ban on egg collecting and more importantly enforcing the ban enabled the Hobby to expand from its New Forest strong-hold. Crows were less persecuted so the number of potential nest sites increased. The extraction of gravel in the Home Counties and into Cambridgeshire created open water gravel pits for it to feed on one of its favourite prey items – dragonflies.

While Hobbys are away in winter chasing termites in southern Africa, the City’s Peregrines are catching feral pigeons in the Market Square or wildfowl on the Ouse Washes. 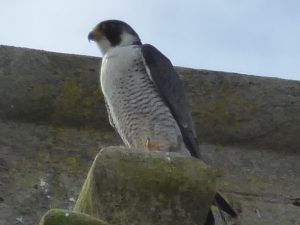 The male Peregrine of our city centre nesting pair on watch some distance from the nest on 15th May – it’s a good sign! The heavy rain the next day on the 16th is a worry as the nest was partially water-logged last year and one chick was lost.

Common Terns have returned and are regularly fishing from Jesus Green to Riverside to Horningsea and Bait’s Bite. Where they breed is a mystery but in August young birds can be seen harassing the adults for food. 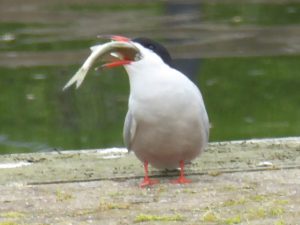 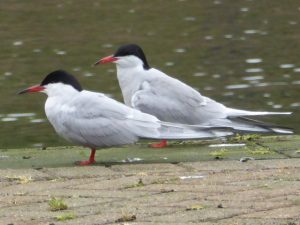 The Common Terns below Elizabeth Way Bridge; one of them swallowing a fish about half the size of the bird itself!

There are at least two singing Whitethroats in bushes along the river on Logan’s Meadow. It’s probably our commonest “scrub” warbler; its pleasant short scratchy song is often the prelude to a towering song flight, a rather clumsy hover and then parachute descent into a bush. Nearby are Treecreepers nesting in one of the nest boxes put up by the Council. 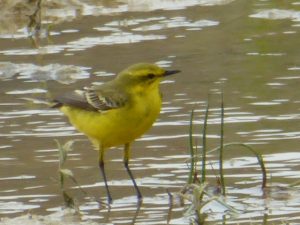 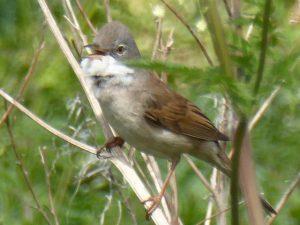 Yellow Wagtails are much less common than they used to be. They are birds of meadows and damp pasture. This bird was photographed in a wet puddle near the Histon Rd/Huntingdon Road footpath on the 11th May. They have adapted to agricultural arable crops and occasionally nest in oilseed rape in the north of our project area. A study by Bill Jordan for the Cambridgeshire Bird Club found fenland birds often nested in potato and pea crops.

So far no definite sight or sound of Black Redstarts in the City. 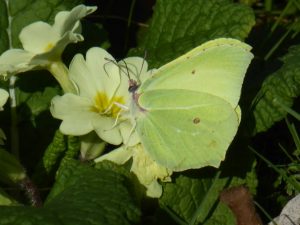 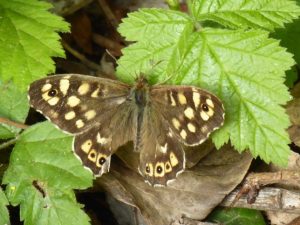 Couldn’t resist a couple of butterfly pics; a Brimstone, left, on a Primrose and a rather battered Speckled Wood that had probably emerged from hibernation; both taken near Histon Road.