In the last 30 years a sub-population of Blackcaps from central Europe have developed a new migration route. Ringing recoveries show that our wintering Blackcaps come from Germany and Austria and have travelled in a WNW direction. The typical migratory route is SW to over-winter in the Iberian Peninsula and Morocco. The belief is that our warming winters and especially garden feeders are the reasons Blackcaps are over-wintering. From January to March 2017 we received Blackcap records from 28 locations in our project area in the City. Twenty-eight locations seemed good and so the records were consolidated into our project. 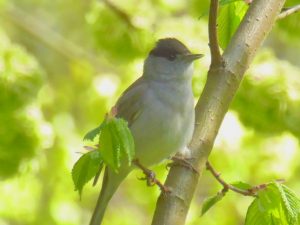 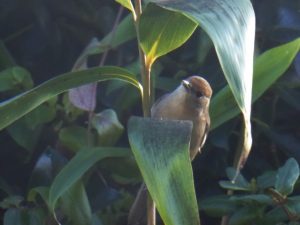 Bill measurements from captured over-wintering birds show that winter birds have thicker bills than summering birds which may be a micro-adaptation to feeding on seeds and fat balls in garden feeders.

To extend Margaret’s observations further it maybe that Blackcaps are showing evolutionary behaviour with changes in morphology (bill thickening), physiology (ability to digest seeds and fat balls) and behaviour (new migration route). A reasonable comparison would be the evolution of Darwin’s Finches on the Galapagos Islands (incidentally, not discovered by Darwin!).

To extend the analysis even further what we might be seeing is the “micro-evolution”, in the last 30 years, of a new clone or even sub-species. What happens in central Europe, when our wintering population returns and meet Blackcaps that have arrived from their SW migration, could tell us whether a new population is evolving. Wait long enough and birders may get another species tick!