On Monday 26th March 2018, a fine spring-like day, I took a group of students visiting Cambridge for the Student Conference on Conservation Science for a walk to Paradise local nature reserve. I chatted about the management of the area while we walked and enjoyed the world around us. We started at the Mill Pond, where I pointed out Hart’s-tongue Fern Asplenium scolopendrium growing on the damp stonework of the weir and then walked along the river towards Robinson Crusoe Island. 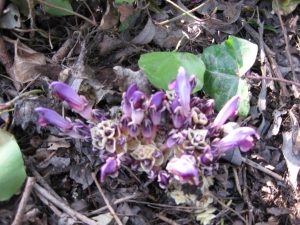 e we found the Purple Toothwort Lathraea clandestine, (right) a parasitic plant introduced from Europe about 1888. It was first recorded in the wild in 1908, here on Coe Fen in Cambridge.

There was also Colt’s-foot Tussilago farfara in flower, while by the banks of one of the streams crossing Coe Fen were yellow patches of both Lesser Celandine Ficaria verna and Garden Daffodil. We also noticed a bird in a nest box high in one of the trees and through binoculars, identified it as a Kestrel Falco tinnunculus.

Crossing Fen Causeway, we noted another parasitic plant, Mistletoe Viscum album. Then, as we walked south, we got good views of a Little Egret Egretta garzetta in the stream running parallel to the main river. By Sheep’s Green Bridge, there were two Swans Cygnus olor and several Mallards Anas platyrhynchos. 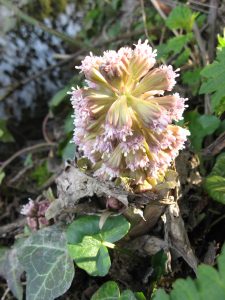 In Paradise, we found Butterbur Petasites hybridus (left) growing where it had been recorded over 400 years ago by the notable Cambridge botanist, John Ray. As we left Paradise, we noticed a strip of Few-flowered Leek Allium paradoxum spreading along the edge of the Lammas Land car park. This non-native garlic crops up quite a lot around Cambridge and seems to be somewhat invasive.

Walking back towards Fen Causeway, one of the group saw a small blunt-nosed mammal in the ditch which, from his description, could have been a Water Vole Arvicola terrestris. I didn’t see it, so cannot confirm the identification, but they have been seen in that area. We then headed back towards the Mill Pond, distracted on the way by several Long-tailed Tits Aegithalos caudatus and a Goldfinch Carduelis carduelis in some scrub near Laundress Green. Altogether, in about 2 ½ hours and a few kilometres we recorded 18 species of bird. The others were Blackbird, Black-headed Gull, Blue Tit, Canada Geese, Carrion Crow, Grey Heron, Magpie, Moorhen, Pheasant, Robin, Woodpigeon and a Wren.